Suicidal behaviour across the African continent: a review of the literature 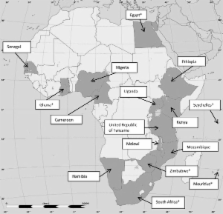 Suicide is a major cause of premature mortality worldwide, but data on its epidemiology in Africa, the world’s second most populous continent, are limited.

We systematically reviewed published literature on suicidal behaviour in African countries. We searched PubMed, Web of Knowledge, PsycINFO, African Index Medicus, Eastern Mediterranean Index Medicus and African Journals OnLine and carried out citation searches of key articles. We crudely estimated the incidence of suicide and suicide attempts in Africa based on country-specific data and compared these with published estimates. We also describe common features of suicide and suicide attempts across the studies, including information related to age, sex, methods used and risk factors.

Regional or national suicide incidence data were available for less than one third (16/53) of African countries containing approximately 60% of Africa’s population; suicide attempt data were available for <20% of countries (7/53). Crude estimates suggest there are over 34,000 (inter-quartile range 13,141 to 63,757) suicides per year in Africa, with an overall incidence rate of 3.2 per 100,000 population. The recent Global Burden of Disease (GBD) estimate of 49,558 deaths is somewhat higher, but falls within the inter-quartile range of our estimate. Suicide rates in men are typically at least three times higher than in women. The most frequently used methods of suicide are hanging and pesticide poisoning. Reported risk factors are similar for suicide and suicide attempts and include interpersonal difficulties, mental and physical health problems, socioeconomic problems and drug and alcohol use/abuse. Qualitative studies are needed to identify additional culturally relevant risk factors and to understand how risk factors may be connected to suicidal behaviour in different socio-cultural contexts.

David Gunnell, Michael Eddleston, Michael R Phillips … (2007)
Background Evidence is accumulating that pesticide self-poisoning is one of the most commonly used methods of suicide worldwide, but the magnitude of the problem and the global distribution of these deaths is unknown. Methods We have systematically reviewed the worldwide literature to estimate the number of pesticide suicides in each of the World Health Organisation's six regions and the global burden of fatal self-poisoning with pesticides. We used the following data sources: Medline, EMBASE and psycINFO (1990–2007), papers cited in publications retrieved, the worldwide web (using Google) and our personal collections of papers and books. Our aim was to identify papers enabling us to estimate the proportion of a country's suicides due to pesticide self-poisoning. Results We conservatively estimate that there are 258,234 (plausible range 233,997 to 325,907) deaths from pesticide self-poisoning worldwide each year, accounting for 30% (range 27% to 37%) of suicides globally. Official data from India probably underestimate the incidence of suicides; applying evidence-based corrections to India's official data, our estimate for world suicides using pesticides increases to 371,594 (range 347,357 to 439,267). The proportion of all suicides using pesticides varies from 4% in the European Region to over 50% in the Western Pacific Region but this proportion is not concordant with the volume of pesticides sold in each region; it is the pattern of pesticide use and the toxicity of the products, not the quantity used, that influences the likelihood they will be used in acts of fatal self-harm. Conclusion Pesticide self-poisoning accounts for about one-third of the world's suicides. Epidemiological and toxicological data suggest that many of these deaths might be prevented if (a) the use of pesticides most toxic to humans was restricted, (b) pesticides could be safely stored in rural communities, and (c) the accessibility and quality of care for poisoning could be improved.

Michael R Phillips, Xianyun Li, Yanping Zhang (2002)
A wide range of suicide rates are reported for China because official mortality data are based on an unrepresentative sample and because different reports adjust crude rates in different ways. We aimed to present an accurate picture of the current pattern of suicide in China on the basis of conservative estimates of suicide rates in different population cohorts. Suicide rates by sex, 5-year age-group, and region (urban or rural) reported in mortality data for 1995-99 provided by the Chinese Ministry of Health were adjusted according to an estimated rate of unreported deaths and projected to the corresponding population. We estimated a mean annual suicide rate of 23 per 100,000 and a total of 287,000 suicide deaths per year. Suicide accounted for 3(.)6% of all deaths in China and was the fifth most important cause of death. Among young adults 15-34 years of age, suicide was the leading cause of death, accounting for 19% of all deaths. The rate in women was 25% higher than in men, mainly because of the large number of suicides in young rural women. Rural rates were three times higher than urban rates-a difference that remained true for both sexes, for all age-groups, and over time. Suicide is a major public-health problem for China that is only gradually being recognised. The unique pattern of suicides in China is widely acknowledged, so controversy about the overall suicide rate should not delay the development and testing of China-specific suicide-prevention programmes.

Rebuilding the tower of Babel: a revised nomenclature for the study of suicide and suicidal behaviors. Part 1: Background, rationale, and methodology.