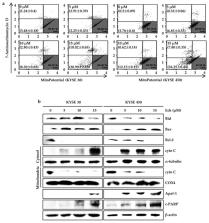 Esophageal squamous cell carcinoma (ESCC) is a poor prognostic cancer with a low five-year survival rate. Echinatin (Ech) is a retrochalone from licorice. It has been used as a herbal medicine due to its anti-inflammatory and anti-oxidative effects. However, its anticancer activity or underlying mechanism has not been elucidated yet. Thus, the objective of this study was to investigate the anti-tumor activity of Ech on ESCC by inducing ROS and ER stress dependent apoptosis. Ech inhibited ESCC cell growth in anchorage-dependent and independent analysis. Treatment with Ech induced G2/M phase of cell cycle and apoptosis of ESCC cells. It also regulated their related protein markers including p21, p27, cyclin B1, and cdc2. Ech also led to phosphorylation of JNK and p38. Regarding ROS and ER stress formation associated with apoptosis, we found that Ech increased ROS production, whereas its increase was diminished by NAC treatment. In addition, ER stress proteins were induced by treatment with Ech. Moreover, Ech enhanced MMP dysfunction and caspases activity. Furthermore, it regulated related biomarkers. Taken together, our results suggest that Ech can induce apoptosis in human ESCC cells via ROS/ER stress generation and p38 MAPK/JNK activation.

Rebecca Siegel,  Kimberly D Miller,  Ahmedin Jemal (2019)
Each year, the American Cancer Society estimates the numbers of new cancer cases and deaths that will occur in the United States and compiles the most recent data on cancer incidence, mortality, and survival. Incidence data, available through 2015, were collected by the Surveillance, Epidemiology, and End Results Program; the National Program of Cancer Registries; and the North American Association of Central Cancer Registries. Mortality data, available through 2016, were collected by the National Center for Health Statistics. In 2019, 1,762,450 new cancer cases and 606,880 cancer deaths are projected to occur in the United States. Over the past decade of data, the cancer incidence rate (2006-2015) was stable in women and declined by approximately 2% per year in men, whereas the cancer death rate (2007-2016) declined annually by 1.4% and 1.8%, respectively. The overall cancer death rate dropped continuously from 1991 to 2016 by a total of 27%, translating into approximately 2,629,200 fewer cancer deaths than would have been expected if death rates had remained at their peak. Although the racial gap in cancer mortality is slowly narrowing, socioeconomic inequalities are widening, with the most notable gaps for the most preventable cancers. For example, compared with the most affluent counties, mortality rates in the poorest counties were 2-fold higher for cervical cancer and 40% higher for male lung and liver cancers during 2012-2016. Some states are home to both the wealthiest and the poorest counties, suggesting the opportunity for more equitable dissemination of effective cancer prevention, early detection, and treatment strategies. A broader application of existing cancer control knowledge with an emphasis on disadvantaged groups would undoubtedly accelerate progress against cancer.

Susan A. Elmore (2007)
The process of programmed cell death, or apoptosis, is generally characterized by distinct morphological characteristics and energy-dependent biochemical mechanisms. Apoptosis is considered a vital component of various processes including normal cell turnover, proper development and functioning of the immune system, hormone-dependent atrophy, embryonic development and chemical-induced cell death. Inappropriate apoptosis (either too little or too much) is a factor in many human conditions including neurodegenerative diseases, ischemic damage, autoimmune disorders and many types of cancer. The ability to modulate the life or death of a cell is recognized for its immense therapeutic potential. Therefore, research continues to focus on the elucidation and analysis of the cell cycle machinery and signaling pathways that control cell cycle arrest and apoptosis. To that end, the field of apoptosis research has been moving forward at an alarmingly rapid rate. Although many of the key apoptotic proteins have been identified, the molecular mechanisms of action or inaction of these proteins remain to be elucidated. The goal of this review is to provide a general overview of current knowledge on the process of apoptosis including morphology, biochemistry, the role of apoptosis in health and disease, detection methods, as well as a discussion of potential alternative forms of apoptosis.

David J Newman,  Gordon M. Cragg (2016)
This contribution is a completely updated and expanded version of the four prior analogous reviews that were published in this journal in 1997, 2003, 2007, and 2012. In the case of all approved therapeutic agents, the time frame has been extended to cover the 34 years from January 1, 1981, to December 31, 2014, for all diseases worldwide, and from 1950 (earliest so far identified) to December 2014 for all approved antitumor drugs worldwide. As mentioned in the 2012 review, we have continued to utilize our secondary subdivision of a "natural product mimic", or "NM", to join the original primary divisions and the designation "natural product botanical", or "NB", to cover those botanical "defined mixtures" now recognized as drug entities by the U.S. FDA (and similar organizations). From the data presented in this review, the utilization of natural products and/or their novel structures, in order to discover and develop the final drug entity, is still alive and well. For example, in the area of cancer, over the time frame from around the 1940s to the end of 2014, of the 175 small molecules approved, 131, or 75%, are other than "S" (synthetic), with 85, or 49%, actually being either natural products or directly derived therefrom. In other areas, the influence of natural product structures is quite marked, with, as expected from prior information, the anti-infective area being dependent on natural products and their structures. We wish to draw the attention of readers to the rapidly evolving recognition that a significant number of natural product drugs/leads are actually produced by microbes and/or microbial interactions with the "host from whence it was isolated", and therefore it is considered that this area of natural product research should be expanded significantly.