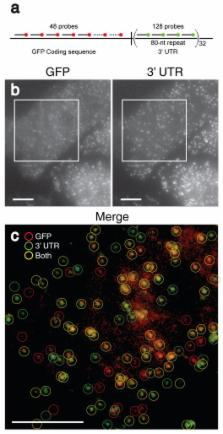 Shepherd R. Singer,  Jonathan Fay,  K Fogarty … (1998)
Fluorescence in situ hybridization (FISH) and digital imaging microscopy were modified to allow detection of single RNA molecules. Oligodeoxynucleotide probes were synthesized with five fluorochromes per molecule, and the light emitted by a single probe was calibrated. Points of light in exhaustively deconvolved images of hybridized cells gave fluorescent intensities and distances between probes consistent with single messenger RNA molecules. Analysis of beta-actin transcription sites after serum induction revealed synchronous and cyclical transcription from single genes. The rates of transcription initiation and termination and messenger RNA processing could be determined by positioning probes along the transcription unit. This approach extends the power of FISH to yield quantitative molecular information on a single cell.

David Dubnau,  Hédia Maamar,  Arjun Raj (2007)
Random cell-to-cell variations in gene expression within an isogenic population can lead to transitions between alternative states of gene expression. Little is known about how these variations (noise) in natural systems affect such transitions. In Bacillus subtilis, noise in ComK, the protein that regulates competence for DNA uptake, is thought to cause cells to transition to the competent state in which genes encoding DNA uptake proteins are expressed. We demonstrate that noise in comK expression selects cells for competence and that experimental reduction of this noise decreases the number of competent cells. We also show that transitions are limited temporally by a reduction in comK transcription. These results illustrate how such stochastic transitions are regulated in a natural system and suggest that noise characteristics are subject to evolutionary forces.