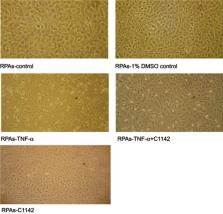 Background: To evaluate the effects of resveratrol to monocyte chemoattractant protein-1 (MCP-1) and the role of p38 mitogen-activated protein kinase (MAPK) in this process in vitro.

Results: We found that the RPAs-TNF-α elicited significant increases in MCP-1 expression and phosphorylation of p38 mitogen-activated protein kinase (p-p38 MAPK). Furthermore, the MCP-1 expressions of RPAs-Resveratrol, RPAs-C1142, and RPAs-SB203580 were significantly down-regulated, which was associated with robustly suppressed TNF-α-induced p-p38MAPK expression.

Conclusion: Our findings suggested that MCP-1 was involved in the formation of TNF-α-induced inflammatory response, and resveratrol could down-regulate the expression of MCP-1 via TNF-α- inhibition, which might contribute to the decline of acute PTE-induced PH in vivo.

Xiaoxia Zhu,  Qiong Liu,  Meimei Wang … (2011)
Inflammation is one of main mechanisms of autoimmune disorders and a common feature of most diseases. Appropriate suppression of inflammation is a key resolution to treat the diseases. Sirtuin1 (Sirt1) has been shown to play a role in regulation of inflammation. Resveratrol, a potent Sirt1 activator, has anti-inflammation property. However, the detailed mechanism is not fully understood. In this study, we investigated the anti-inflammation role of Sirt1 in NIH/3T3 fibroblast cell line. Upregulation of matrix metalloproteinases 9 (MMP-9), interleukin-1beta (IL-1β), IL-6 and inducible nitric oxide synthase (iNOS) were induced by tumor necrosis factor alpha (TNF-α) in 3T3 cells and resveratrol suppressed overexpression of these pro-inflammatory molecules in a dose-dependent manner. Knockdown of Sirt1 by RNA interference caused 3T3 cells susceptible to TNF-α stimulation and diminished anti-inflammatory effect of resveratrol. We also explored potential anti-inflammatory mechanisms of resveratrol. Resveratrol reduced NF-κB subunit RelA/p65 acetylation, which is notably Sirt1 dependent. Resveratrol also attenuated phosphorylation of mammalian target of rapamycin (mTOR) and S6 ribosomal protein (S6RP) while ameliorating inflammation. Our data demonstrate that resveratrol inhibits TNF-α-induced inflammation via Sirt1. It suggests that Sirt1 is an efficient target for regulation of inflammation. This study provides insight on treatment of inflammation-related diseases.

Pathophysiology and treatment of haemodynamic instability in acute pulmonary embolism: the pivotal role of pulmonary vasoconstriction.

Inhibition of p38 MAP kinase as a therapeutic strategy.