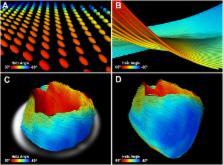 We characterized the microstructural response of the myocardium to cardiovascular disease using diffusion tensor imaging (DTI) and performed histological validation by intact, un-sectioned, three-dimensional (3D) histology using a tissue-clearing technique. The approach was validated in normal (n = 7) and ischemic (n = 8) heart failure model mice. Whole heart fiber tracking using DTI in fixed ex-vivo mouse hearts was performed, and the hearts were processed with the tissue-clearing technique. Cardiomyocytes orientation was quantified on both DTI and 3D histology. Helix angle (HA) and global HA transmurality (HAT) were calculated, and the DTI findings were confirmed with 3D histology. Global HAT was significantly reduced in the ischemic group (DTI: 0.79 ± 0.13°/% transmural depth [TD] and 3D histology: 0.84 ± 0.26°/%TD) compared with controls (DTI: 1.31 ± 0.20°/%TD and 3D histology: 1.36 ± 0.27°/%TD, all p < 0.001). On direct comparison of DTI with 3D histology for the quantitative assessment of cardiomyocytes orientation, significant correlations were observed in both per-sample (R 2 = 0.803) and per-segment analyses (R 2 = 0.872). We demonstrated the capability and accuracy of DTI for mapping cardiomyocytes orientation by comparison with the intact 3D histology acquired by tissue-clearing technique. DTI is a promising tool for the noninvasive characterization of cardiomyocytes architecture.

Matthew D. Budde,  L Turtzo,  Steven Frank … (2011)
Diffusion tensor imaging is highly sensitive to the microstructural integrity of the brain and has uncovered significant abnormalities following traumatic brain injury not appreciated through other methods. It is hoped that this increased sensitivity will aid in the detection and prognostication in patients with traumatic injury. However, the pathological substrates of such changes are poorly understood. Specifically, decreases in fractional anisotropy derived from diffusion tensor imaging are consistent with axonal injury, myelin injury or both in white matter fibres. In contrast, in both humans and animal models, increases in fractional anisotropy have been suggested to reflect axonal regeneration and plasticity, but the direct histological evidence for such changes remains tenuous. We developed a method to quantify the anisotropy of stained histological sections using Fourier analysis, and applied the method to a rat controlled cortical impact model to identify the specific pathological features that give rise to the diffusion tensor imaging changes in subacute to chronic traumatic brain injury. A multiple linear regression was performed to relate the histological measurements to the measured diffusion tensor changes. The results show that anisotropy was significantly increased (P < 0.001) in the perilesioned cortex following injury. Cortical anisotropy was independently associated (standardized β = 0.62, P = 0.04) with the coherent organization of reactive astrocytes (i.e. gliosis) and was not attributed to axons. By comparison, a decrease in white matter anisotropy (P < 0.001) was significantly related to demyelination (β = 0.75, P = 0.0015) and to a lesser extent, axonal degeneration (β = -0.48, P = 0.043). Gliosis within the lesioned cortex also influenced diffusion tensor tractography, highlighting the fact that spurious tracts in the injured brain may not necessarily reflect continuous axons and may instead depict glial scarring. The current study demonstrates a novel method to relate pathology to diffusion tensor imaging findings, elucidates the underlying mechanisms of anisotropy changes following traumatic brain injury and significantly impacts the clinical interpretation of diffusion tensor imaging findings in the injured brain.

Stephan B Munch,  Federica Marone,  Marco Stampanoni … (2009)
A fast, powerful and stable filter based on combined wavelet and Fourier analysis for the elimination of horizontal or vertical stripes in images is presented and compared with other types of destriping filters. Strict separation between artifacts and original features allowing both, suppression of the unwanted structures and high degree of preservation of the original image information is endeavoured. The results are validated by visual assessments, as well as by quantitative estimation of the image energy loss. The capabilities and the performance of the filter are tested on a number of case studies related to applications in tomographic imaging. The case studies include (i) suppression of waterfall artifacts in electron microscopy images based on focussed ion beam nanotomography, (ii) removal of different types of ring artifacts in synchrotron based X-ray microtomography and (iii) suppression of horizontal stripe artifacts from phase projections in grating interferometry.

Valentina Püntmann,  Elif Peker,  Y Chandrashekhar … (2016)
Cardiovascular magnetic resonance provides insights into myocardial structure and function noninvasively, with high diagnostic accuracy and without ionizing radiation. Myocardial tissue characterization in particular gives cardiovascular magnetic resonance a prime role among all the noninvasive cardiovascular investigations. Late gadolinium enhancement imaging is an established method for visualizing replacement scar, providing diagnostic and prognostic information in a variety of cardiac conditions. Late gadolinium enhancement, however, relies on the regional segregation of tissue characteristics to generate the imaging contrast. Thus, myocardial pathology that is diffuse in nature and affecting the myocardium in a rather uniform and global distribution is not well visualized with late gadolinium enhancement. Examples include diffuse myocardial inflammation, fibrosis, hypertrophy, and infiltration. T1 mapping is a novel technique allowing to diagnose these diffuse conditions by measurement of T1 values, which directly correspond to variation in intrinsic myocardial tissue properties. In addition to providing clinically meaningful indices, T1-mapping measurements also allow for an estimation of extracellular space by calculation of extracellular volume fraction. Multiple lines of evidence suggest a central role for T1 mapping in detection of diffuse myocardial disease in early disease stages and complements late gadolinium enhancement in visualization of the regional changes in common advanced myocardial disease. As a quantifiable measure, it may allow grading of disease activity, monitoring progress, and guiding treatment, potentially as a fast contrast-free clinical application. We present an overview of clinically relevant technical aspects of acquisition and processing, and the current state of art and evidence, supporting its clinical use.