The vascular phenotype in Pseudoxanthoma elasticum and related disorders: contribution of a genetic disease to the understanding of vascular calcification 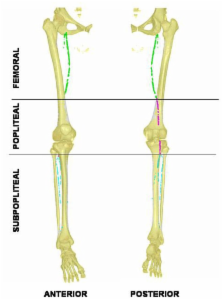 Vascular calcification is a complex and dynamic process occurring in various physiological conditions such as aging and exercise or in acquired metabolic disorders like diabetes or chronic renal insufficiency. Arterial calcifications are also observed in several genetic diseases revealing the important role of unbalanced or defective anti- or pro-calcifying factors. Pseudoxanthoma elasticum (PXE) is an inherited disease (OMIM 264800) characterized by elastic fiber fragmentation and calcification in various soft conjunctive tissues including the skin, eyes, and arterial media. The PXE disease results from mutations in the ABCC6 gene, encoding an ATP-binding cassette transporter primarily expressed in the liver, kidneys suggesting that it is a prototypic metabolic soft-tissue calcifying disease of genetic origin. The clinical expression of the PXE arterial disease is characterized by an increased risk for coronary (myocardial infarction), cerebral (aneurysm and stroke), and lower limb peripheral artery disease. However, the structural and functional changes in the arterial wall induced by PXE are still unexplained. The use of a recombinant mouse model inactivated for the Abcc6 gene is an important tool for the understanding of the PXE pathophysiology although the vascular impact in this model remains limited to date. Overlapping of the PXE phenotype with other inherited calcifying diseases could bring important informations to our comprehension of the PXE disease.

Jan Staessen,  Gérard E Plante,  Natasha F. O’Rourke … (2002)
Arterial stiffening is the most important cause of increasing systolic and pulse pressure, and for decreasing diastolic pressure beyond 40 years of age. Stiffening affects predominantly the aorta and proximal elastic arteries, and to a lesser degree the peripheral muscular arteries. While conceptually a Windkessel model is the simplest way to visualize the cushioning function of arteries, this is not useful clinically under changing conditions when effects of wave reflection become prominent. Many measures have been applied to quantify stiffness, but all are approximations only, on account of the nonhomogeneous structure of the arterial wall, its variability in different locations, at different levels of distending pressure, and with changes in smooth muscle tone. This article summarizes the methods and indices used to estimate arterial stiffness, and provides values from a survey of the literature, followed by recommendations of an international group of workers in the field who attended the First Consensus Conference on Arterial Stiffness, which was held in Paris during 2000, under the chairmanship of M.E. Safar and E.D. Frohlich.

Cynthia St. Hilaire,  Shira G Ziegler,  Thomas Markello … (2011)
Arterial calcifications are associated with increased cardiovascular risk, but the genetic basis of this association is unclear. We performed clinical, radiographic, and genetic studies in three families with symptomatic arterial calcifications. Single-nucleotide-polymorphism analysis, targeted gene sequencing, quantitative polymerase-chain-reaction assays, Western blotting, enzyme measurements, transduction rescue experiments, and in vitro calcification assays were performed. We identified nine persons with calcifications of the lower-extremity arteries and hand and foot joint capsules: all five siblings in one family, three siblings in another, and one patient in a third family. Serum calcium, phosphate, and vitamin D levels were normal. Affected members of Family 1 shared a single 22.4-Mb region of homozygosity on chromosome 6 and had a homozygous nonsense mutation (c.662C→A, p.S221X) in NT5E, encoding CD73, which converts AMP to adenosine. Affected members of Family 2 had a homozygous missense mutation (c.1073G→A, p.C358Y) in NT5E. The proband of Family 3 was a compound heterozygote for c.662C→A and c.1609dupA (p.V537fsX7). All mutations found in the three families result in nonfunctional CD73. Cultured fibroblasts from affected members of Family 1 showed markedly reduced expression of NT5E messenger RNA, CD73 protein, and enzyme activity, as well as increased alkaline phosphatase levels and accumulated calcium phosphate crystals. Genetic rescue experiments normalized the CD73 and alkaline phosphatase activity in patients' cells, and adenosine treatment reduced the levels of alkaline phosphatase and calcification. We identified mutations in NT5E in members of three families with symptomatic arterial and joint calcifications. This gene encodes CD73, which converts AMP to adenosine, supporting a role for this metabolic pathway in inhibiting ectopic tissue calcification. (Funded by the National Human Genome Research Institute and the National Heart, Lung, and Blood Institute of the National Institutes of Health.).