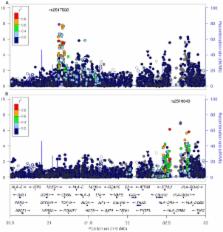 Hypothyroidism is the most common thyroid disorder, affecting about 5% of the general population. Here we present the current largest genome-wide association study of hypothyroidism, in 3,736 cases and 35,546 controls. Hypothyroidism was assessed via web-based questionnaires. We identify five genome-wide significant associations, three of which are well known to be involved in a large spectrum of autoimmune diseases: rs6679677 near PTPN22, rs3184504 in SH2B3, and rs2517532 in the HLA class I region (

). VAV3 is involved in immune function, and FOXE1 and PTPN22 have previously been associated with hypothyroidism. Although the HLA class I region and SH2B3 have previously been linked with a number of autoimmune diseases, this is the first report of their association with thyroid disease. The VAV3 association is also novel. We also show suggestive evidence of association for hypothyroidism with a SNP in the HLA class II region (independent of the other HLA association) as well as SNPs in CAPZB, PDE8B, and CTLA4. CAPZB and PDE8B have been linked to TSH levels and CTLA4 to a variety of autoimmune diseases. These results suggest heterogeneity in the genetic etiology of hypothyroidism, implicating genes involved in both autoimmune disorders and thyroid function. Using a genetic risk profile score based on the top association from each of the five genome-wide significant regions in our study, the relative risk between the highest and lowest deciles of genetic risk is 2.0.

A note on exact tests of Hardy-Weinberg equilibrium.

Gonçalo R Abecasis,  Adrian Cutler,  J Wigginton (2005)
Deviations from Hardy-Weinberg equilibrium (HWE) can indicate inbreeding, population stratification, and even problems in genotyping. In samples of affected individuals, these deviations can also provide evidence for association. Tests of HWE are commonly performed using a simple chi2 goodness-of-fit test. We show that this chi2 test can have inflated type I error rates, even in relatively large samples (e.g., samples of 1,000 individuals that include approximately 100 copies of the minor allele). On the basis of previous work, we describe exact tests of HWE together with efficient computational methods for their implementation. Our methods adequately control type I error in large and small samples and are computationally efficient. They have been implemented in freely available code that will be useful for quality assessment of genotype data and for the detection of genetic association or population stratification in very large data sets.

Publisher ID: PONE-D-11-14352
DOI: 10.1371/journal.pone.0034442
PMC ID: 3321023
PubMed ID: 22493691
Copyright statement: Eriksson et al. This is an open-access article distributed under the terms of the Creative Commons Attribution License, which permits unrestricted use, distribution, and reproduction in any medium, provided the original author and source are credited.