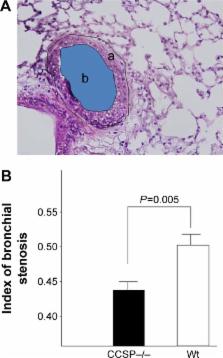 Differences in interleukin-8 and tumor necrosis factor-alpha in induced sputum from patients with chronic obstructive pulmonary disease or asthma.

V Keatings,  Jennifer J. P. Collins,  Troy M. Scott … (1996)
Asthma and chronic obstructive pulmonary disease are characterized by chronic airway inflammation. Studies using bronchoalveolar lavage (BAL) have shown an increased proportion of eosinophils in the BAL fluid from asthmatics compared with that from normal subjects, whereas studies of chronic obstructive pulmonary disease (COPD) have shown increased numbers of neutrophils. Induced sputum allows sampling of respiratory tract secretions from patients and control subjects, providing a noninvasive method of studying airway secretions and allowing characterization of cells and measurement of soluble markers. We investigated whether induced sputum was a useful method of studying airway fluid from patients with moderate to severe COPD and whether it could be used to compare inflammation in this condition with that in asthma. An initial reproducibility study was undertaken. Sputum was induced twice in 13 patients with severe COPD at a 14-d interval. Total and differential cell counts were carried out and were found to be reproducible over this period. Sputum was then induced in 14 patients with COPD, 23 patients with asthma, 12 healthy cigarette smokers, and 16 normal nonsmoking control subjects. We found a significant increase in neutrophils and increased concentrations of tumor necrosis factor-alpha (TNF alpha) and interleukin-8 (IL-8) in the patients with COPD compared with the smoking and nonsmoking control subjects. Interleukin-8, but not TNF alpha, was significantly higher in the COPD group than in the asthmatic group. We conclude that the cytokines TNF alpha and IL-8 may be involved in the inflammation in COPD.

Viswanathan Natarajan,  Terry R Medler,  W. Hubbard … (2005)
Alveolar cell apoptosis is involved in the pathogenesis of emphysema, a prevalent disease primarily caused by cigarette smoking. We report that ceramide, a second messenger lipid, is a crucial mediator of alveolar destruction in emphysema. Inhibition of enzymes controlling de novo ceramide synthesis prevented alveolar cell apoptosis, oxidative stress and emphysema caused by blockade of the vascular endothelial growth factor (VEGF) receptors in both rats and mice. Emphysema was reproduced with intratracheal instillation of ceramide in naive mice. Excessive ceramide triggers a feed-forward mechanism mediated by activation of secretory acid sphingomyelinase, as suggested by experiments with neutralizing ceramide antibody in mice and with acid sphingomyelinase-deficient fibroblasts. Concomitant augmentation of signaling initiated by a prosurvival metabolite, sphingosine-1-phosphate, prevented lung apoptosis, implying that a balance between ceramide and sphingosine-1-phosphate is required for maintenance of alveolar septal integrity. Finally, increased lung ceramides in individuals with smoking-induced emphysema suggests that ceramide upregulation may be a crucial pathogenic element and a promising target in this disease that currently lacks effective therapies.