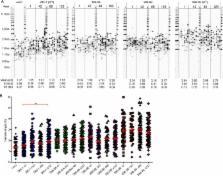 TIN2 is central to the shelterin complex, linking the telomeric proteins TRF1 and TRF2 with TPP1/POT1. Mutations in TINF2, which encodes TIN2, that are found in dyskeratosis congenita (DC) result in very short telomeres and cluster in a region shared by the two TIN2 isoforms, TIN2S (short) and TIN2L (long). Here we show that TIN2L, but not TIN2S, is phosphorylated. TRF2 interacts more with TIN2L than TIN2S, and both the DC cluster and phosphorylation promote this enhanced interaction. The binding of TIN2L, but not TIN2S, is affected by TRF2-F120, which is also required for TRF2's interaction with end processing factors such as Apollo. Conversely, TRF1 interacts more with TIN2S than with TIN2L. A DC-associated mutation further reduces TIN2L-TRF1, but not TIN2S-TRF1, interaction. Cells overexpressing TIN2L or phosphomimetic TIN2L are permissive to telomere elongation, whereas cells overexpressing TIN2S or phosphodead TIN2L are not. Telomere lengths are unchanged in cell lines in which TIN2L expression has been eliminated by clustered regularly interspaced short palindromic repeat (CRISPR)/Cas9-mediated mutation. These results indicate that TIN2 isoforms are biochemically and functionally distinguishable and that shelterin composition could be fundamentally altered in patients with TINF2 mutations.

Matthew G Hoffman,  Pyoung-Oh Yoon,  Judit Villén … (2011)
The evolutionarily conserved serine-threonine kinase mammalian target of rapamycin (mTOR) plays a critical role in regulating many pathophysiological processes. Functional characterization of the mTOR signaling pathways, however, has been hampered by the paucity of known substrates. We used large-scale quantitative phosphoproteomics experiments to define the signaling networks downstream of mTORC1 and mTORC2. Characterization of one mTORC1 substrate, the growth factor receptor-bound protein 10 (Grb10), showed that mTORC1-mediated phosphorylation stabilized Grb10, leading to feedback inhibition of the phosphatidylinositol 3-kinase (PI3K) and extracellular signal-regulated, mitogen-activated protein kinase (ERK-MAPK) pathways. Grb10 expression is frequently down-regulated in various cancers, and loss of Grb10 and loss of the well-established tumor suppressor phosphatase PTEN appear to be mutually exclusive events, suggesting that Grb10 might be a tumor suppressor regulated by mTORC1.

The RNA component of telomerase is mutated in autosomal dominant dyskeratosis congenita.

I Dokal,  T Vulliamy,  A Marrone … (2001)
Dyskeratosis congenita is a progressive bone-marrow failure syndrome that is characterized by abnormal skin pigmentation, leukoplakia and nail dystrophy. X-linked, autosomal recessive and autosomal dominant inheritance have been found in different pedigrees. The X-linked form of the disease is due to mutations in the gene DKC1 in band 2, sub-band 8 of the long arm of the X chromosome (ref. 3). The affected protein, dyskerin, is a nucleolar protein that is found associated with the H/ACA class of small nucleolar RNAs and is involved in pseudo-uridylation of specific residues of ribosomal RNA. Dyskerin is also associated with telomerase RNA (hTR), which contains a H/ACA consensus sequence. Here we map the gene responsible for dyskeratosis congenita in a large pedigree with autosomal dominant inheritance. Affected members of this family have an 821-base-pair deletion on chromosome 3q that removes the 3' 74 bases of hTR. Mutations in hTR were found in two other families with autosomal dominant dyskeratosis congenita.