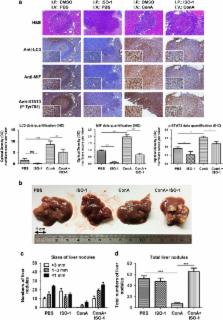 Concanavalin A (ConA) is a lectin and T-cell mitogen that can activate immune responses. In recent times, ConA-induced cell death of hepatoma cells through autophagy has been reported and its therapeutic effect was confirmed in a murine in situ hepatoma model. However, the molecular mechanism of ConA-induced autophagy is still unclear. As macrophage migration inhibitory factor (MIF), which is a proinflammatory cytokine, can trigger autophagy in human hepatoma cells, the possible involvement of MIF in ConA-induced autophagy was investigated in this study. We demonstrated that cell death is followed by an increment in MIF expression and secretion in the ConA-stimulated human hepatoma cell lines, HuH-7 and Hep G2. In addition, ConA-induced autophagy and cell death of hepatoma cells were blocked in the presence of an MIF inhibitor. Knockdown of endogenous MIF by small hairpin RNA confirmed that MIF is required for both ConA-induced autophagy and death of hepatoma cells. Furthermore, signal pathway studies demonstrated that ConA induces signal transducer and activator of transcription 3 (STAT3) phosphorylation to trigger MIF upregulation, which in turn promotes Bcl-2/adenovirus E1B 19 kDa-interacting protein 3 (BNIP3)-dependent autophagy. By using a murine in situ hepatoma model, we further demonstrated that MIF contributes to anti-hepatoma activity of ConA by regulating STAT3–MIF–BNIP3-dependent autophagy. In summary, our findings uncover a novel role of MIF in lectin-mediated anti-hepatoma activities by regulating autophagy.

Thierry Calandra, Thierry Roger (2003)
Key Points Cytokines are essential effector molecules of innate immunity that initiate and coordinate the cellular and humoral responses aimed, for example, at the eradication of microbial pathogens. Discovered in the late 1960s as a product of activated T cells, the cytokine macrophage migration inhibitory factor (MIF) has been discovered recently to carry out important functions as a mediator of the innate immune system. Constitutively expressed by a broad spectrum of cells and tissues, including monocytes and macrophages, MIF is rapidly released after exposure to microbial products and pro-inflammatory mediators, and in response to stress. After it is released, MIF induces pro-inflammatory biological responses that act as a regulator of immune responses. MIF activates the extracellular signal-regulated kinase 1 (ERK1)/ERK2–mitogen-activated protein kinase pathway, inhibits the activity of JUN activation domain-binding protein 1 (JAB1) — a co-activator of the activator protein 1 (AP1) — upregulates the expression of Toll-like receptor 4 to promote the recognition of endotoxin-expressing bacterial pathogens, sustains pro-inflammatory function by inhibiting p53-dependent apoptosis of macrophages and counter-regulates the immunosuppressive effects of glucocorticoids on immune cells. As a pro-inflammatory mediator, MIF has been shown to be implicated in the pathogenesis of severe sepsis and septic shock, acute respiratory distress syndrome, and several other inflammatory and autoimmune diseases, including rheumatoid arthritis, glomerulonephritis and inflammatory bowel diseases. Given its crucial role as a regulator of innate and acquired immunity, pharmacological or immunological modulation of MIF activity might offer new treatment opportunities for the management of acute and chronic inflammatory diseases.

Lin Leng, Christine Metz, YAN FANG … (2003)
Macrophage migration inhibitory factor (MIF) accounts for one of the first cytokine activities to have been described, and it has emerged recently to be an important regulator of innate and adaptive immunity. MIF is an upstream activator of monocytes/macrophages, and it is centrally involved in the pathogenesis of septic shock, arthritis, and other inflammatory conditions. The protein is encoded by a unique but highly conserved gene, and X-ray crystallography studies have shown MIF to define a new protein fold and structural superfamily. Although recent work has begun to illuminate the signal transduction pathways activated by MIF, the nature of its membrane receptor has not been known. Using expression cloning and functional analysis, we report herein that CD74, a Type II transmembrane protein, is a high-affinity binding protein for MIF. MIF binds to the extracellular domain of CD74, and CD74 is required for MIF-induced activation of the extracellular signal–regulated kinase–1/2 MAP kinase cascade, cell proliferation, and PGE2 production. A recombinant, soluble form of CD74 binds MIF with a dissociation constant of ∼9 × 10−9 K d, as defined by surface plasmon resonance (BIAcore analysis), and soluble CD74 inhibits MIF-mediated extracellular signal–regulated kinase activation in defined cell systems. These data provide a molecular basis for MIF's interaction with target cells and identify it as a natural ligand for CD74, which has been implicated previously in signaling and accessory functions for immune cell activation.

Mechanism of a reaction in vitro associated with delayed-type hypersensitivity.

B R Bloom, B. Bennett (1966)
The cell type responsible for inhibition by antigen of migration in vitro of peritoneal exudate cells obtained from tuberculin-hypersensitive guinea pigs was studied. Exudate populations were separated into component cell types, the lymphocyte and the macrophage. Peritoneal lymphocytes from sensitive donors were the immunologically active cells in this system, the macrophages, being merely indicator cells which migrate. Sensitized peritoneal lymphocyte populations, upon interaction with specific antigen in vitro, elaborated into the medium a soluble material capable of inhibiting migration of normal exudate cells.

Cell Death and Disease is an open-access journal published by Nature Publishing Group. This work is licensed under a Creative Commons Attribution 4.0 International License. The images or other third party material in this article are included in the article's Creative Commons license, unless indicated otherwise in the credit line; if the material is not included under the Creative Commons license, users will need to obtain permission from the license holder to reproduce the material. To view a copy of this license, visit http://creativecommons.org/licenses/by/4.0/