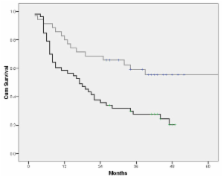 beside the well known predominance of distant vs. loco-regional relapse, several aspects of the relapse pattern still have not been fully elucidated.

Specific oncological treatment of relapse was possible in 27/50(54%) patients.

the intensified follow up did not increase either the proportion of patients detected with asymptomatic relapse or the number of patients with specific oncological treatment of relapse.

Effect of number of lymph nodes sampled on outcome in patients with stage I non-small-cell lung cancer.

S Hillinger,  W Weder,  R Schmid … (1998)
Accurate staging of non-small cell lung cancer is essential for treatment planning. We evaluated in a prospective study the role of whole-body 2-[18F]fluoro-2-deoxy-D-glucose (FDG) positron emission tomography (PET) in mediastinal nodal staging with a positive predictive value of 96%. The study was continued to further evaluate the value of whole-body FDG PET in detecting unexpected extrathoracic metastases (ETMs) in patients qualifying for surgical treatment by conventional staging. One hundred patients underwent clinical evaluation, chest and upper abdominal computed tomography scan, mediastinoscopy (lymph nodes greater than 1 cm on computed tomography), and routine laboratory tests. In 94 patients with stage IIIa or less and 6 with suspected N3 a whole-body FDG PET was performed. If clinical signs of ETMs were present additional diagnostic methods were applied. All findings in the FDG PET were confirmed histologically or radiologically. Unexpected ETMs were detected in 13 (14%) of 94 patients (stage IIIa or less) at 14 sites. In addition 6 of 94 patients were restaged up to N3 after PET. The suspected N3 disease (stage IIIb) on computed tomography was confirmed by PET in all 6 patients. There was no false positive finding of ETM. Weight loss was correlated with the occurrence of ETM: more than 5 kg, 5 of 13 patients (38%); more than 10 kg, 4 of 6 patients (67%). Pathologic laboratory findings were not predictive for ETM. Whole-body FDG PET improves detection of ETMs in patients with non-small cell lung cancer otherwise elegible for operation. In 14% of patients (stage IIIa or less), ETMs were detected, and in total, 20% of the patients were understaged.

Peter Keller,  Matthew D. Johnson,  S Adak … (2000)
Mediastinal lymph node dissection (MLND) is an integral part of surgery for non-small cell lung cancer (NSCLC). To compare the impact of systematic sampling (SS) and complete MLND on the identification of mediastinal lymph node metastases and patient survival, the Eastern Cooperative Oncology Group (ECOG) stratified patients by type of MLND before participation in ECOG 3590 (a randomized prospective trial of adjuvant therapy in patients with completely resected stages II and IIIa NSCLC). Eligibility requirements for study entry included a thorough investigation of the mediastinal lymph nodes with either SS or complete MLND. The former was defined as removal of at least one lymph node at levels 4, 7, and 10 during a right thoracotomy and at levels 5 and/or 6 and 7 during a left thoracotomy, while the latter required complete removal of all lymph nodes at those levels. Three hundred seventy-three eligible patients were accrued to the study. Among the 187 patients who underwent SS, N1 disease was identified in 40% and N2 disease in 60%. This was not significantly different than the 41% of N1 disease and 59% of N2 disease found among the 186 patients who underwent complete MLND. Among the 222 patients with N2 metastases, multiple levels of N2 disease were documented in 30% of patients who underwent complete MLND and in 12% of patients who had SS (p = 0.001). Median survival was 57.5 months for those patients who had undergone complete MLND and 29.2 months for those patients who had SS (p = 0.004). However, the survival advantage was limited to patients with right lung tumors (66.4 months vs 24.5 months, p<0.001). In this nonrandomized comparison, SS was as efficacious as complete MLND in staging patients with NSCLC. However, complete MLND identified significantly more levels of N2 disease. Furthermore, complete MLND was associated with improved survival with right NSCLC when compared with SS.

This is an Open Access article distributed under the terms of the Creative Commons Attribution License (http://creativecommons.org/licenses/by/2.0), which permits unrestricted use, distribution, and reproduction in any medium, provided the original work is properly cited.