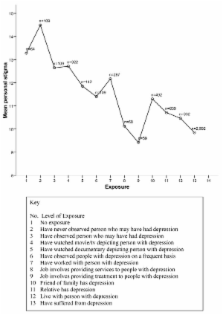 To investigate and compare the predictors of personal and perceived stigma associated with depression.

Three samples were surveyed to investigate the predictors: a national sample of 1,001 Australian adults; a local community sample of 5,572 residents of the Australian Capital Territory and Queanbeyan aged 18 to 50 years; and a psychologically distressed subset (n = 487) of the latter sample. Personal and Perceived Stigma were measured using the two subscales of the Depression Stigma Scale. Potential predictors included demographic variables (age, gender, education, country of birth, remoteness of residence), psychological distress, awareness of Australia's national depression initiative beyondblue, depression literacy and level of exposure to depression. Not all predictors were used for all samples.

Personal stigma was consistently higher among men, those with less education and those born overseas. It was also associated with greater current psychological distress, lower prior contact with depression, not having heard of a national awareness raising initiative, and lower depression literacy. These findings differed from those for perceived stigma except for psychological distress which was associated with both higher personal and higher perceived stigma. Remoteness of residence was not associated with either type of stigma.

Kathryn G Andrews,  Angela Slade (2001)
To provide normative data on the Kessler Psychological Distress Scale (K10), a scale that is being increasingly used for clinical and epidemiological purposes. The National Survey of Mental Health And Well-Being was used to provide normative comparative data on symptoms, disability, service utilisation and diagnosis for the range of possible K10 scores. The K10 is related in predictable ways to these other measures. The K10 is suitable to assess morbidity in the population, and may be appropriate for use in clinical practice.

Kimberley Evans,  Helen Christensen,  Jeffrey K Griffiths … (2004)
Little is known about the efficacy of educational interventions for reducing the stigma associated with depression. To investigate the effects on stigma of two internet depression sites. A sample of 525 individuals with elevated scores on a depression assessment scale were randomly allocated to a depression information website (BluePages), a cognitive-behavioural skills training website (MoodGYM) or an attention control condition. Personal stigma (personal stigmatising attitudes to depression) and perceived stigma (perception of what most other people believe) were assessed before and after the intervention. Relative to the control, the internet sites significantly reduced personal stigma, although the effects were small. BluePages had no effect on perceived stigma and MoodGYM was associated with an increase in perceived stigma relative to the control. Changes in stigma were not mediated by changes in depression, depression literacy or cognitive-behavioural therapy literacy. The internet warrants further investigation as a means of delivering stigma reduction programmes for depression.

"Mental health literacy": a survey of the public's ability to recognise mental disorders and their beliefs about the effectiveness of treatment.

P A Jacomb,  A Jorm,  Anthony F. Jorm … (1997)
To assess the public's recognition of mental disorders and their beliefs about the effectiveness of various treatments ("mental health literacy"). A cross-sectional survey, in 1995, with structured interviews using vignettes of a person with either depression or schizophrenia. A representative national sample of 2031 individuals aged 18-74 years; 1010 participants were questioned about the depression vignette and 1021 about the schizophrenia vignette. Most of the participants recognised the presence of some sort of mental disorder: 72% for the depression vignette (correctly labelled as depression by 39%) and 84% for the schizophrenia vignette (correctly labelled by 27%). When various people were rated as likely to be helpful or harmful for the person described in the vignette for depression, general practitioners (83%) and counsellors (74%) were most often rated as helpful, with psychiatrists (51%) and psychologists (49%) less so. Corresponding data for the schizophrenia vignette were: counsellors (81%), GPs (74%), psychiatrists (71%) and psychologists (62%). Many standard psychiatric treatments (antidepressants, antipsychotics, electroconvulsive therapy, admission to a psychiatric ward) were more often rated as harmful than helpful, and some nonstandard treatments were rated highly (increased physical or social activity, relaxation and stress management, reading about people with similar problems). Vitamins and special diets were more often rated as helpful than were antidepressants and antipsychotics. If mental disorders are to be recognised early in the community and appropriate intervention sought, the level of mental health literacy needs to be raised. Further, public understanding of psychiatric treatments can be considerably improved.