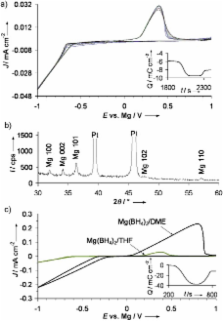 R Turgeman,  Z. Lu,  G Aurbach … (2000)
The thermodynamic properties of magnesium make it a natural choice for use as an anode material in rechargeable batteries, because it may provide a considerably higher energy density than the commonly used lead-acid and nickel-cadmium systems. Moreover, in contrast to lead and cadmium, magnesium is inexpensive, environmentally friendly and safe to handle. But the development of Mg batteries has been hindered by two problems. First, owing to the chemical activity of Mg, only solutions that neither donate nor accept protons are suitable as electrolytes; but most of these solutions allow the growth of passivating surface films, which inhibit any electrochemical reaction. Second, the choice of cathode materials has been limited by the difficulty of intercalating Mg ions in many hosts. Following previous studies of the electrochemistry of Mg electrodes in various non-aqueous solutions, and of a variety of intercalation electrodes, we have now developed rechargeable Mg battery systems that show promise for applications. The systems comprise electrolyte solutions based on Mg organohaloaluminate salts, and Mg(x)Mo3S4 cathodes, into which Mg ions can be intercalated reversibly, and with relatively fast kinetics. We expect that further improvements in the energy density will make these batteries a viable alternative to existing systems.

Structure and compatibility of a magnesium electrolyte with a sulphur cathode

The authors would like to thank Dr. T. Matsunaga and Dr. C. Bucur for the discussions. Funding was provided by Toyota Motor Engineering and Manufacturing North America Inc.

Re-use of this article is permitted in accordance with the Terms and Conditions set out at http://angewandte.org/open.