Determinants of Sexual Activity and Pregnancy among Unmarried Young Women in Urban Kenya: A Cross-Sectional Study 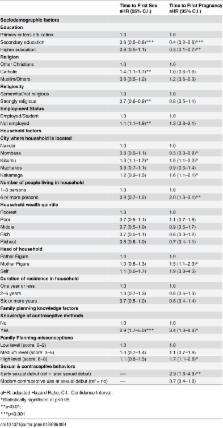 Baseline data from five urban areas in Kenya (Nairobi, Mombasa, Kisumu, Machakos, and Kakamega) collected in 2010 by the Measurement, Learning & Evaluation project were used. Women aged 15-24 years, who had never been married, and were not living with a male partner at the time of survey (weighted n=2020) were included. Using weighted, multivariate Cox proportional hazard regression and logistic regression analyses, we assessed factors associated with three outcome measures: time to first sex, time to first pregnancy, and teenage pregnancy.

One-half of our sample had ever had sex; the mean age at first sex among the sexually-experienced was 17.7 (± 2.6) years. About 15% had ever been pregnant; mean age at first pregnancy was 18.3 (±2.2) years. Approximately 11% had a teenage pregnancy. Three-quarters (76%) of those who had ever been pregnant (weighted n=306) reported the pregnancy was unwanted at the time. Having secondary education was associated with a later time to first sex and first pregnancy. In addition, religion, religiosity, and employment status were associated with time to first sex while city of residence, household size, characteristics of household head, family planning knowledge and misconceptions, and early sexual debut were significantly associated with time to first pregnancy. Education, city of residence, household wealth, early sexual debut, and contraceptive use at sexual debut were associated with teenage pregnancy for those 20-24 years.

WHO guidelines on preventing early pregnancy and poor reproductive outcomes among adolescents in developing countries.

Venkatraman Chandra-Mouli, Alma Virginia Camacho-Hubner, Pierre-André Michaud (2013)
Adolescent pregnancy and its consequences represent a major public health concern in many low-middle income countries of the world. The World Health Organization has recently developed evidence-based guidelines addressing six areas: preventing early marriage; preventing early pregnancy through sexuality education, increasing education opportunities and economic and social support programs; increasing the use of contraception; reducing coerced sex; preventing unsafe abortion; and increasing the use of prenatal care childbirth and postpartum care. In each of these areas, World Health Organization recommends directions for future research. The summary concludes with a brief look at global and regional initiatives that provide a window of opportunity for stepping up action in this important area.

The effects of unintended pregnancy on infant, child, and parental health: a review of the literature.

Jessica Gipson, Barbara A. Koenig, Michelle Hindin (2008)
This article provides a critical review of studies assessing the effects of unintended pregnancy on the health of infants, children, and parents in developed and developing countries. A framework for determining and measuring the pathways between unintended pregnancy and future health outcomes is outlined. The review highlights persistent gaps in the literature, indicating a need for more studies in developing countries and for further research to assess the impact of unintended pregnancy on parental health and long-term health outcomes for children and families. The challenges in measuring and assessing these health impacts are also discussed, highlighting avenues in which further research efforts could substantially bolster existing knowledge.

Prevalence and determinants of unintended pregnancy among women in Nairobi, Kenya

This research work was funded by the Bill & Melinda Gates Foundation ( www.gatesfoundation.org/) and was supported by grant, 5 R24 HD050924, Carolina Population Center, awarded to the Carolina Population Center at The University of North Carolina at Chapel Hill by the Eunice Kennedy Shriver National Institute of Child Health and Human Development ( www.nichd.nih.gov). The funders had no role in study design, data collection and analysis, decision to publish, or preparation of the manuscript. In addition, the contents of this paper are solely the responsibility of the authors and do not necessarily represent the official views of the funders.

Data Availability Data are available from the MLE Data Manager at Carolina Population Center upon request (email: mle-data-use-inquiry@ 123456unc.edu ). You will need to submit a third party data request form for the data to be available to you. The form can be obtained from https://www.urbanreproductivehealth.org/sites/mle/files/third_party_data_request_form_-_kenya_june_2014.pdf.
ScienceOpen disciplines: Uncategorized
Data availability:
ScienceOpen disciplines: Uncategorized