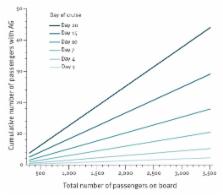 When an increased number of acute gastroenteritis (AG) cases is detected among tourists staying at the same accommodation, outbreak management plans must be activated in a timely manner to prevent large outbreaks. Syndromic surveillance data collected between 1 January 2010 and 31 December 2013 by five seagoing cruise ships were analysed to identify attack rate thresholds for early outbreak detection. The overall incidence rate of AG was 2.81 cases per 10,000 traveller-days (95% confidence interval (CI): 0.00–17.60), while the attack rate was 19.37 cases per 10,000 travellers (95% CI: 0.00–127.69). The probability of an outbreak occurring was 11% if 4 per 1,000 passengers reported symptoms within the first 2 days of the voyage, and this increased to 23 % if 5 per 1,000 passengers reported such within the first 3 days. The risk ratio (RR) for outbreak occurrence was 2.35, 5.66 and 8.63 for 1, 2 and 3 days’ delay of symptoms reporting respectively, suggesting a dose–response relationship. Shipping companies’ policies and health authorities’ efforts may consider these thresholds for initiating outbreak response measures based on the number of cases according to day of cruise. Efforts should focus on ensuring travellers report symptoms immediately and comply with isolation measures.

Norovirus Disease in the United States

Aron Hall,  Ben A Lopman,  Daniel C Payne … (2013)
Although recognized as the leading cause of epidemic acute gastroenteritis across all age groups, norovirus has remained poorly characterized with respect to its endemic disease incidence. Use of different methods, including attributable proportion extrapolation, population-based surveillance, and indirect modeling, in several recent studies has considerably improved norovirus disease incidence estimates for the United States. Norovirus causes an average of 570–800 deaths, 56,000–71,000 hospitalizations, 400,000 emergency department visits, 1.7–1.9 million outpatient visits, and 19–21 million total illnesses per year. Persons >65 years of age are at greatest risk for norovirus-associated death, and children <5 years of age have the highest rates of norovirus-associated medical care visits. Endemic norovirus disease occurs year round but exhibits a pronounced winter peak and increases by ≤50% during years in which pandemic strains emerge. These findings support continued development and targeting of appropriate interventions, including vaccines, for norovirus disease.

The Vast and Varied Global Burden of Norovirus: Prospects for Prevention and Control

Benjamin A Lopman,  Duncan Steele,  Carl D. Kirkwood … (2016)
Globally, norovirus is associated with approximately one-fifth of all diarrhea cases, with similar prevalence in both children and adults, and is estimated to cause over 200,000 deaths annually in developing countries. Norovirus is an important pathogen in a number of high-priority domains: it is the most common cause of diarrheal episodes globally, the principal cause of foodborne disease outbreaks in the United States, a key health care–acquired infection, a common cause of travel-associated diarrhea, and a bane for deployed military troops. Partly as a result of this ubiquity and burden across a range of different populations, identifying target groups and strategies for intervention has been challenging. And, on top of the breadth of this public health problem, there remain important gaps in scientific knowledge regarding norovirus, especially with respect to disease in low-income settings. Many pathogens can cause acute gastroenteritis. Historically, rotavirus was the most common cause of severe disease in young children globally. Now, vaccines are available for rotavirus and are universally recommended by the World Health Organization. In countries with effective rotavirus vaccination programs, disease due to that pathogen has decreased markedly, but norovirus persists and is now the most common cause of pediatric gastroenteritis requiring medical attention. However, the data supporting the precise role of norovirus in low- and middle-income settings are sparse. With vaccines in the pipeline, addressing these and other important knowledge gaps is increasingly pressing. We assembled an expert group to assess the evidence for the global burden of norovirus and to consider the prospects for norovirus vaccine development. The group assessed the evidence in the areas of burden of disease, epidemiology, diagnostics, disease attribution, acquired immunity, and innate susceptibility, and the group considered how to bring norovirus vaccines from their current state of development to a viable product that will benefit global health.

The frequency of a Norwalk-like pattern of illness in outbreaks of acute gastroenteritis.

[1 ]Department of Hygiene and Epidemiology, Faculty of Medicine, University of Thessaly, Larissa, Greece
[2 ]Celestyal Cruises, Piraeus, Greece
[3 ]Robert Koch Institute, Berlin, Germany
[4 ]The members of the group are listed at the end of the article