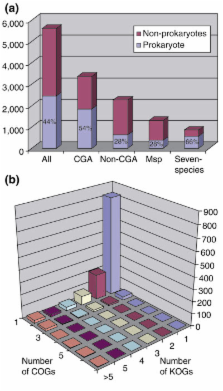 We examined functional and evolutionary patterns in the recently constructed set of 5,873 clusters of predicted orthologs from seven eukaryotic genomes. The analysis reveals a conserved core of largely essential eukaryotic genes as well as major diversification and innovation associated with evolution of eukaryotic genomes.

We examined functional and evolutionary patterns in the recently constructed set of 5,873 clusters of predicted orthologs (eukaryotic orthologous groups or KOGs) from seven eukaryotic genomes: Caenorhabditis elegans, Drosophila melanogaster, Homo sapiens, Arabidopsis thaliana, Saccharomyces cerevisiae, Schizosaccharomyces pombe and Encephalitozoon cuniculi. Conservation of KOGs through the phyletic range of eukaryotes strongly correlates with their functions and with the effect of gene knockout on the organism's viability. The approximately 40% of KOGs that are represented in six or seven species are enriched in proteins responsible for housekeeping functions, particularly translation and RNA processing. These conserved KOGs are often essential for survival and might approximate the minimal set of essential eukaryotic genes. The 131 single-member, pan-eukaryotic KOGs we identified were examined in detail. For around 20 that remained uncharacterized, functions were predicted by in-depth sequence analysis and examination of genomic context. Nearly all these proteins are subunits of known or predicted multiprotein complexes, in agreement with the balance hypothesis of evolution of gene copy number. Other KOGs show a variety of phyletic patterns, which points to major contributions of lineage-specific gene loss and the 'invention' of genes new to eukaryotic evolution. Examination of the sets of KOGs lost in individual lineages reveals co-elimination of functionally connected genes. Parsimonious scenarios of eukaryotic genome evolution and gene sets for ancestral eukaryotic forms were reconstructed. The gene set of the last common ancestor of the crown group consists of 3,413 KOGs and largely includes proteins involved in genome replication and expression, and central metabolism. Only 44% of the KOGs, mostly from the reconstructed gene set of the last common ancestor of the crown group, have detectable homologs in prokaryotes; the remainder apparently evolved via duplication with divergence and invention of new genes.

Sequencing and comparison of yeast species to identify genes and regulatory elements.

Nick Patterson,  Manolis Kellis,  M. Endrizzi … (2003)
Identifying the functional elements encoded in a genome is one of the principal challenges in modern biology. Comparative genomics should offer a powerful, general approach. Here, we present a comparative analysis of the yeast Saccharomyces cerevisiae based on high-quality draft sequences of three related species (S. paradoxus, S. mikatae and S. bayanus). We first aligned the genomes and characterized their evolution, defining the regions and mechanisms of change. We then developed methods for direct identification of genes and regulatory motifs. The gene analysis yielded a major revision to the yeast gene catalogue, affecting approximately 15% of all genes and reducing the total count by about 500 genes. The motif analysis automatically identified 72 genome-wide elements, including most known regulatory motifs and numerous new motifs. We inferred a putative function for most of these motifs, and provided insights into their combinatorial interactions. The results have implications for genome analysis of diverse organisms, including the human.

Genome sequence of the nematode C. elegans: a platform for investigating biology.

James Mussell (1999)
The 97-megabase genomic sequence of the nematode Caenorhabditis elegans reveals over 19,000 genes. More than 40 percent of the predicted protein products find significant matches in other organisms. There is a variety of repeated sequences, both local and dispersed. The distinctive distribution of some repeats and highly conserved genes provides evidence for a regional organization of the chromosomes.

Publisher ID: gb-2004-5-2-r7
PMC ID: 395751
PubMed ID: 14759257
Copyright statement: Copyright © 2004 Koonin et al; licensee BioMed Central Ltd. This is an Open Access article: verbatim copying and redistribution of this article are permitted in all media for any purpose, provided this notice is preserved along with the article's original URL.