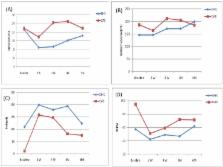 We investigated the efficacy and safety of intravesical onabotulinumtoxinA injection in patients with detrusor hyperactivity and impaired contractility (DHIC). Twenty-one patients with urodynamically proven DHIC and 21 age-matched patients with overactive bladder (OAB) with urodynamic detrusor overactivity were treated with intravesical injections of 100 U of onabotulinumtoxinA. The overactive bladder symptom score, urgency severity score, patient perception of bladder condition, global response assessment, voiding diary, and procedure-related adverse events (AE) at baseline, two weeks, one, three, and six months after treatment were assessed. The results showed that the subjective symptom scores improved significantly in both groups, and the scores did not differ between the groups. The decrease in urgency episodes and urgency urinary incontinence were noted in OAB patients but not in DHIC patients. Although the incidence of AEs was comparable between the groups, the therapeutic efficacy lasted for a mean of 4.9 ± 4.8 months in DHIC patients and 7.2 ± 3.3 months in OAB patients ( p = 0.03). We concluded that the efficacy of intravesical onabotulinumtoxinA injection for DHIC patients was limited and short-term. Nevertheless, AEs did not increase in DHIC. Intravesical onabotulinumtoxinA might not be a good indication in patients with DHIC and high post-voiding residual urine. Physicians should inform patients of the potential benefits and risks of onabotulinumtoxinA injection for treatment of DHIC.

The standardisation of terminology of lower urinary tract function: report from the Standardisation Sub-committee of the International Continence Society.

E Ann Gormley,  Deborah Lightner,  Kathryn L Burgio … (2012)
The purpose of this guideline is to provide a clinical framework for the diagnosis and treatment of non-neurogenic overactive bladder (OAB). The primary source of evidence for this guideline is the systematic review and data extraction conducted as part of the Agency for Healthcare Research and Quality (AHRQ) Evidence Report/Technology Assessment Number 187 titled Treatment of Overactive Bladder in Women (2009). That report searched PubMed, MEDLINE®, EMBASE and CINAHL for English-language studies published from January 1966 to October 2008. The AUA conducted additional literature searches to capture treatments not covered in detail by the AHRQ report and relevant articles published between October 2008 and December 2011. The review yielded an evidence base of 151 treatment articles after application of inclusion/exclusion criteria. When sufficient evidence existed, the body of evidence for a particular treatment was assigned a strength rating of A (high), B (moderate) or C (low). Additional treatment information is provided as Clinical Principles and Expert Opinions when insufficient evidence existed. The evidence-based guideline statements are provided for diagnosis and overall management of the adult with OAB symptoms as well as for various treatments. The panel identified first through third line treatments as well as non-FDA approved, rarely applicable and treatments that should not be offered. The evidence-based statements are provided for diagnosis and overall management of OAB, as well as for the various treatments. Diagnosis and treatment methodologies can be expected to change as the evidence base grows and as new treatment strategies become obtainable. Copyright © 2012 American Urological Association Education and Research, Inc. Published by Elsevier Inc. All rights reserved.