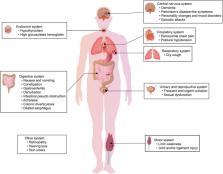 Due to the high clinical heterogeneity of neuronal intranuclear inclusion disease (NIID), it is easy to misdiagnose this condition and is considered to be a rare progressive neurodegenerative disease. More evidence demonstrates that NIID involves not only the central nervous system but also multiple systems of the body and shows a variety of symptoms, which makes a clinical diagnosis of NIID more difficult. This review summarizes the clinical symptoms in different systems and demonstrates that NIID is a multiple-system intranuclear inclusion disease. In addition, the core triad symptoms in the central nervous system, such as dementia, parkinsonism, and psychiatric symptoms, are proposed as an important clue for the clinical diagnosis of NIID. Recent studies have demonstrated that expanded GGC repeats in the 5′-untranslated region of the NOTCH2NLC gene are the cause of NIID. The genetic advances and possible underlying mechanisms of NIID (expanded GGC repeat-induced DNA damage, RNA toxicity, and polyglycine-NOTCH2NLC protein toxicity) are briefly summarized in this review. Interestingly, inflammatory cell infiltration and inflammation were observed in the affected tissues of patients with NIID. As a downstream pathological process of NIID, inflammation could be a therapeutic target for NIID.

Ankur Jain, Ronald D. Vale (2017)
Expansions of short nucleotide repeats produce several neurological and neuromuscular disorders including Huntington’s disease, muscular dystrophy and amyotrophic lateral sclerosis. A common pathological feature of these diseases is the accumulation of the repeat containing transcripts into aberrant foci in the nucleus. RNA foci, as well as the disease symptoms, only manifest above a critical number of nucleotide repeats, but the molecular mechanism governing foci formation above this characteristic threshold remains unresolved. Here, we show that repeat expansions create templates for multivalent base-pairing, which causes purified RNA to undergo a sol-gel transition at a similar critical repeat number as observed in the diseases. In cells, RNA foci form by phase separation of the repeat-containing RNA and can be dissolved by agents that disrupt RNA gelation in vitro. Analogous to protein aggregation disorders, our results suggest that the sequence-specific gelation of RNAs could be a contributing factor to neurological disease.

Albert R. La Spada, Max F J R Taylor (2010)
Repeat expansion mutations cause at least 22 inherited neurological diseases. The complexity of repeat disease genetics and pathobiology has revealed unexpected shared themes and mechanistic pathways among the diseases, such as RNA toxicity. Also, investigation of the polyglutamine diseases has identified post-translational modification as a key step in the pathogenic cascade and has shown that the autophagy pathway has an important role in the degradation of misfolded proteins--two themes that are likely to be relevant to the entire neurodegeneration field. Insights from repeat disease research are catalysing new lines of study that should not only elucidate molecular mechanisms of disease but also highlight opportunities for therapeutic intervention for these currently untreatable disorders.

Tomasz Nowakowski, Ian T Fiddes, Gerrald A Lodewijk … (2018)
Genetic changes causing brain size expansion in human evolution have remained elusive. Notch signaling is essential for radial glia stem cell proliferation and is a determinant of neuronal number in the mammalian cortex. We find three paralogs of human-specific NOTCH2NL are highly expressed in radial glia. Functional analysis reveals different alleles of NOTCH2NL have varying potencies to enhance Notch signaling by interacting directly with NOTCH receptors. Consistent with a role in Notch signaling, NOTCH2NL ectopic expression delays differentiation of neuronal progenitors, while deletion accelerates differentiation into cortical neurons. Furthermore, NOTCH2NL genes provide the breakpoints in 1q21.1 distal deletion/duplication syndrome, where duplications are associated with macrocephaly and autism, and deletions with microcephaly and schizophrenia. Thus, the emergence of human-specific NOTCH2NL genes may have contributed to the rapid evolution of the larger human neocortex accompanied by loss of genomic stability at the 1q21.1 locus and resulting recurrent neurodevelopmental disorders. Human-specific Notch paralogs are expressed in radial glia, enhance Notch signaling and impact neuronal differentiation.

This article was submitted to Alzheimer’s Disease and Related Dementias, a section of the journal Frontiers in Aging Neuroscience