The effect of environmental factors on the differential expression of miRNAs in patients with chronic obstructive pulmonary disease: a pilot clinical study 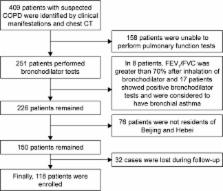 A total of 118 patients in the northern region and 8 migratory patients were enrolled in this prospective study. We collected general information. Blood samples were collected from 9 patients in the Beijing group, from 8 patients in the migratory group and from 9 healthy control subjects. After extracting the total RNA from these 3 groups, serum miRNA was identified by Solexa sequencing. We collected COPD assessment test (CAT) and Modified British Medical Research Council (mMRC) scores at different levels of air pollution and also collected the number of exacerbations over the year prior to the baseline and in the year preceding the follow-up.

Environmental factors may cause differential expression of miRNAs in the peripheral blood of migratory and local patients in northern People’s Republic of China. Air pollution may aggravate clinical symptoms of patients with COPD.

Charles Dinarello (2000)
To review the concept of proinflammatory cytokines. Review of published literature. Academic (university hospital). Cytokines are regulators of host responses to infection, immune responses, inflammation, and trauma. Some cytokines act to make disease worse (proinflammatory), whereas others serve to reduce inflammation and promote healing (anti-inflammatory). Attention also has focused on blocking cytokines, which are harmful to the host, particularly during overwhelming infection. Interleukin (IL)-1 and tumor necrosis factor (TNF) are proinflammatory cytokines, and when they are administered to humans, they produce fever, inflammation, tissue destruction, and, in some cases, shock and death. Reducing the biological activities of IL-1 and TNF is accomplished by several different, but highly specific, strategies, which involve neutralizing antibodies, soluble receptors, receptor antagonist, and inhibitors of proteases that convert inactive precursors to active, mature molecules. Blocking IL-1 or TNF has been highly successful in patients with rheumatoid arthritis, inflammatory bowel disease, or graft-vs-host disease but distinctly has not been successful in humans with sepsis. Agents such as TNF-neutralizing antibodies, soluble TNF receptors, and IL-1 receptor antagonist have been infused into > 10,000 patients in double-blind, placebo-controlled trials. Although there has been a highly consistent small increase (2 to 3%) in 28-day survival rates with anticytokine therapy, the effect has not been statistically significant. Anticytokine therapy should be able to "rescue" the patient whose condition continues to deteriorate in the face of considerable support efforts. Unfortunately, it remains difficult to identify those patients who would benefit from anticytokine therapy for septic shock.

Meghan Donaldson,  Jadwiga Wedzicha (2006)
The epidemiology of exacerbations of chronic obstructive pulmonary disease (COPD) is reviewed with particular reference to the definition, frequency, time course, natural history and seasonality, and their relationship with decline in lung function, disease severity and mortality. The importance of distinguishing between recurrent and relapsed exacerbations is discussed.