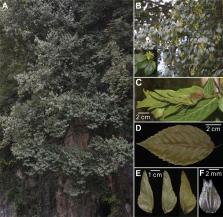 Carpinus gigabracteatus Z. Qiang Lu, a new hornbeam species from southeast Yunnan of China, is described and illustrated in this study. It possesses extremely large bracts and is closely related to C. tsaiana Hu and C. tschonoskii Maxim., based on the characters of large bract size and bracts without lobes at the base of inner margins. Furthermore, morphological comparison suggested it was distinctly different from C. tschonoskii by a series of characters from leaf, infructescence, bract and nutlet and from C. tsaiana by its leaf length to width ratio (1.4–2.0 vs. 2.0–2.4), lateral veins significantly impressed adaxially, number of lateral veins on each side of midvein (9–14 vs. 14–17), bract length (3.9–4.8 vs. 2.5–3.2 cm) and bract length to width ratio (2.3–3.1 vs. 1.5–2.1). Therefore, this hornbeam, based on only one population from southeast Yunnan, is here erected as a new species, named as C. gigabracteatus .

Zhiqiang Lu,  Ying Li,  Xiaoyue Yang … (2018)
Abstract A new species Carpinus tibetana Z. Qiang Lu & J. Quan Liu from southeast Tibet is described and illustrated. The specimens of this new species were previously identified and placed under C. monbeigiana Hand.-Mazz. or C. mollicoma Hu. However, the specimens from southeast Tibet differ from those of C. monbeigiana from other regions with more lateral veins (19–24 vs 14–18) on each side of the midvein and dense pubescence on the abaxial leaf surface, while from those of C. mollicoma from other regions differ by nutlet with dense resinous glands and glabrous or sparsely villous at apex. Principal Component Analyses based on morphometric characters recognise the Tibetan populations as a separate group. Nuclear ribosomal ITS sequence variations show stable and distinct genetic divergences between the Tibetan populations and C. monbeigiana or C. mollicoma by two or three fixed nucleotide mutations. Phylogenetic analysis also identified three respective genetic clusters and the C. mollicoma cluster diverged early. In addition, the Tibetan populations show a disjunct geographic isolation from the other two species. Therefore, C. tibetana , based on the Tibetan populations, is here erected as a new species, distinctly different from C. monbeigiana and C. mollicoma .

No taxon left behind? – a critical taxonomic checklist of Carpinus and Ostrya (Coryloideae, Betulaceae).