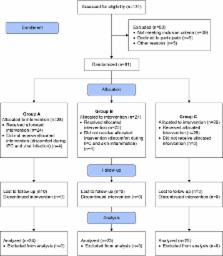 The primary lymphedema and chronic venous insufficiency present an important medical problem, and effective physical therapeutic methods to treat this problem are still at the search phase. The aim of this study was to compare the efficacy of intermittent pneumatic compression (IPC) of a high- or low-pressure level in the treatment of primary phlebolymphedema of the lower limbs.

After completion of the study, it was found that the greatest reduction of edema occurred in patients who underwent treatment with a pressure of 120 mmHg. The comparison of percentage reduction of edema showed a statistically significant advantage of the group A over groups B and C, both for the changes in the right ( P=0.01) and the left limb ( P=0.01). Results in patients undergoing intermittent compression of the lower pressure (60 mmHg) were similar to those obtained in the control group.

The IPC with the pressure of 120 mmHg inside the chambers effectively helps to reduce a phlebolymphedema. Furthermore, it appears that the treatments with a pressure of 60 mmHg are ineffective and their application becomes useless only in the antiedematous therapy.

Jenny Clement,  L Norgren,  A Cornu-Thenard … (1999)
To critically review the classification, epidemiology, outcomes, diagnosis and treatment of chronic venous disorders of the leg (CVDL), to issue evidence-based recommendations, and to identify areas requiring further research. Articles identified by an extensive literature search were scored by members of an international task force. Only those articles with a moderate or strong rating for internal validity were retained. A scoring system weighing CVDL severity according to the probability of ulcer occurrence is proposed. Epidemiological data on the frequency of CVDL and its risk factors are reviewed. The following items are evaluated: costs associated with treatment; clinical outcomes related to CVDL and its treatment; available generic and disease-specific measures of quality of life; diagnostic procedures used to detect venous reflux; and efficacy of available treatments. CVDL is an important public health problem, based on its prevalence, cost and impact on quality of life. High-priority areas for research on CVDL are identified.

Indications for compression therapy in venous and lymphatic disease consensus based on experimental data and scientific evidence. Under the auspices of the IUP.

M Flour,  ,  H Partsch … (2008)
The aim of this study was to review published literature concerning the use of compression treatments in the management of venous and lymphatic diseases and establish where reliable evidence exists to justify the use of medical compression and where further research is required to address areas of uncertainty. The authors searched medical literature databases and reviewed their own collections of papers, monographs and books for papers providing information about the effects of compression and randomized clinical trials of compression devices. Papers were classified in accordance with the recommendations of the GRADE group to categorize their scientific reliability. Further classification was made according to the particular clinical problem that was addressed in the papers. The review included papers on compression stockings, bandages and intermittent pneumatic compression devices. The International Compression Club met once in Vienna and corresponded by email in order to reach an agreement of how the data should be interpreted. A wide range of compression levels was reported to be effective. Low levels of compression 10-30 mmHg applied by stockings are effective in the management of telangiectases after sclerotherapy, varicose veins in pregnancy, the prevention of edema and deep vein thrombosis (DVT). High levels of compression produced by bandaging and strong compression stockings (30-40 mmHg) are effective at healing leg ulcers and preventing progression of post-thrombotic syndrome as well as in the management of lymphedema. In some areas no reliable evidence was available to permit recommendations of level of compression or duration of treatment. These included: management of varicose veins to prevent progression, following surgical treatment or sclerotherapy for varicose veins, and the level of compression required to treat acute DVT. This review shows that whilst good evidence for the use of compression is available in some clinical indications, there is much still to be discovered. Little is know about dosimetry in compression, for how long and at what level compression should be applied. The differing effects of elastic and short-stretch compression are also little understood.

Diagnosis and Treatment of Venous Malformations. Consensus Document of the International Union of Phlebology (IUP): updated 2013.

B B Lee,  I Baumgartner,  H P Berlien … (2015)
Venous malformations (VMs) are the most common vascular developmental anomalies (birth defects) . These defects are caused by developmental arrest of the venous system during various stages of embryogenesis. VMs remain a difficult diagnostic and therapeutic challenge due to the wide range of clinical presentations, unpredictable clinical course, erratic response to the treatment with high recurrence/ persistence rates, high morbidity following non-specific conventional treatment, and confusing terminology. The Consensus Panel reviewed the recent scientific literature up to the year 2013 to update a previous IUP Consensus (2009) on the same subject. ISSVA Classification with special merits for the differentiation between the congenital vascular malformation (CVM) and vascular tumors was reinforced with an additional review on syndrome-based classification. A "modified" Hamburg classification was adopted to emphasize the importance of extratruncular vs. truncular sub-types of VMs. This incorporated the embryological ongm, morphological differences, unique characteristics, prognosis and recurrence rates of VMs based on this embryological classification. The definition and classification of VMs were strengthened with the addition of angiographic data that determines the hemodynamic characteristics, the anatomical pattern of draining veins and hence the risk of complication following sclerotherapy. The hemolymphatic malformations, a combined condition incorporating LMs and other CVMs, were illustrated as a separate topic to differentiate from isolated VMs and to rectify the existing confusion with name-based eponyms such as Klippei-Trenaunay syndrome. Contemporary concepts on VMs were updated with new data including genetic findings linked to the etiology of CVMs and chronic cerebrospinal venous insufficiency. Besides, newly established information on coagulopathy including the role of D-Dimer was thoroughly reviewed to provide guidelines on investigations and anticoagulation therapy in the management of VMs. Congenital vascular bone syndrome resulting in angio-osteo-hyper/hypotrophy and (lateral) marginal vein was separately reviewed. Background data on arterio-venous malformations was included to differentiate this anomaly from syndromebased VMs. For the treatment, a new section on laser therapy and also a practical guideline for follow up assessment were added to strengthen the management principle of the multidisciplinary approach. All other therapeutic modalities were thoroughly updated to accommodate a changing concept through the years.