RNA:protein ratio of the unicellular organism as a characteristic of phosphorous and nitrogen stoichiometry and of the cellular requirement of ribosomes for protein synthesis 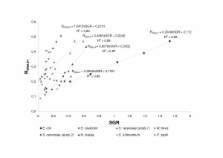 ScienceOpenPublisherPMC
Bookmark
There is no author summary for this article yet. Authors can add summaries to their articles on ScienceOpen to make them more accessible to a non-specialist audience.
BackgroundMean phosphorous:nitrogen (P:N) ratios and relationships of P:N ratios with the growth rate of organisms indicate a surprising similarity among and within microbial species, plants, and insect herbivores. To reveal the cellular mechanisms underling this similarity, the macromolecular composition of seven microorganisms and the effect of specific growth rate (SGR) on RNA:protein ratio, the number of ribosomes, and peptide elongation rate (PER) were analyzed under different conditions of exponential growth.ResultsIt was found that P:N ratios calculated from RNA and protein contents in these particular organisms were in the same range as the mean ratios reported for diverse organisms and had similar positive relationships with growth rate, consistent with the growth-rate hypothesis. The efficiency of protein synthesis in microorganisms is estimated as the number of active ribosomes required for the incorporation of one amino acid into the synthesized protein. This parameter is calculated as the SGR:PER ratio. Experimental and theoretical evidence indicated that the requirement of ribosomes for protein synthesis is proportional to the RNA:protein ratio. The constant of proportionality had the same values for all organisms, and was derived mechanistically from the characteristics of the protein-synthesis machinery of the cell (the number of nucleotides per ribosome, the average masses of nucleotides and amino acids, the fraction of ribosomal RNA in the total RNA, and the fraction of active ribosomes). Impairment of the growth conditions decreased the RNA:protein ratio and increased the overall efficiency of protein synthesis in the microorganisms.ConclusionOur results suggest that the decrease in RNA:protein and estimated P:N ratios with decrease in the growth rate of the microorganism is a consequence of an increased overall efficiency of protein synthesis in the cell resulting from activation of the general stress response and increased transcription of cellular maintenance genes at the expense of growth related genes. The strong link between P:N stoichiometry, RNA:protein ratio, ribosomal requirement for protein synthesis, and growth rate of microorganisms indicated by the study could be used to characterize the N and P economy of complex ecosystems such as soils and the oceans.

J A Klappenbach,  J. Dunbar,  T. Schmidt (2000)
Although natural selection appears to favor the elimination of gene redundancy in prokaryotes, multiple copies of each rRNA-encoding gene are common on bacterial chromosomes. Despite this conspicuous deviation from single-copy genes, no phenotype has been consistently associated with rRNA gene copy number. We found that the number of rRNA genes correlates with the rate at which phylogenetically diverse bacteria respond to resource availability. Soil bacteria that formed colonies rapidly upon exposure to a nutritionally complex medium contained an average of 5.5 copies of the small subunit rRNA gene, whereas bacteria that responded slowly contained an average of 1.4 copies. In soil microcosms pulsed with the herbicide 2,4-dichlorophenoxyacetic acid (2,4-D), indigenous populations of 2,4-D-degrading bacteria with multiple rRNA genes ( = 5.4) became dominant, whereas populations with fewer rRNA genes ( = 2.7) were favored in unamended controls. These findings demonstrate phenotypic effects associated with rRNA gene copy number that are indicative of ecological strategies influencing the structure of natural microbial communities.

Biological stoichiometry from genes to ecosystems