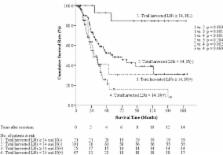 Tumor biology reflected by lymph node status is the most important independent prognostic factor; nevertheless, surgical radicality based on THLN number also plays a significant role in the survival outcome for patients with ampullary carcinoma after curative pancreaticoduodenectomy.

E Sigurdson,  Rory Mayer,  Linda Hanlon … (2003)
To determine the relationship, in patients with adenocarcinoma of the colon, between survival and the number of lymph nodes analyzed from surgical specimens. Intergroup Trial INT-0089 is a mature trial of adjuvant chemotherapy for high-risk patients with stage II and stage III colon cancer. We performed a secondary analysis of this group with overall survival (OS) as the main end point. Cause-specific survival (CSS) and disease-free survival were secondary end points. Rates for these outcome measures were estimated using Kaplan-Meier methodology. Log-rank test was used to compare overall curves, and Cox proportional hazards regression was used to multivariately assess predictors of outcome. The median number of lymph nodes removed at colectomy was 11 (range, one to 87). Of the 3411 assessable patients, 648 had no evidence of lymph node metastasis. Multivariate analyses were performed on the node-positive and node-negative groups separately to ascertain the effect of lymph node removal. Survival decreased with increasing number of lymph node involvement (P =.0001 for all three survival end points). After controlling for the number of nodes involved, survival increased as more nodes were analyzed (P =.0001 for all three end points). Even when no nodes were involved, OS and CSS improved as more lymph nodes were analyzed (P =.0005 and P =.007, respectively). The number of lymph nodes analyzed for staging colon cancers is, itself, a prognostic variable on outcome. The impact of this variable is such that it may be an important variable to include in evaluating future trials.

Taylor Riall,  JoAnn Coleman,  Stephen Cameron … (2006)
To trace the evolution of pancreaticoduodenectomy from the decade of the 1960s through the first decade of the new Millenium, through the experience of one surgeon doing 1000 consecutive operations. A regional resection of the head of the pancreas was first performed successfully by Kausch in 1909. The operation was popularized by Whipple in 1935, who reported 3 pancreaticoduodenectomies. Because of a hospital mortality of approximately 25%, the operation was performed infrequently until the 1980s. From the 1980s on, experience with this complex alimentary tract operation increased, and high-volume centers developed. This resulted in a significant drop in hospital mortality and allowed institutions and individuals to gain large experiences. Between March 1969 and May 2003, 1000 consecutive pancreaticoduodenectomies were performed by a single surgeon. A retrospective review of a prospectively maintained database was performed to determine the management and outcome of these patients, as well as to document the evolution of this operative procedure over 5 decades. The median operative time decreased significantly over the decades, being 8.8 hours in the 1970s and 5.5 hours during the 2000s. Postoperative length of stay dropped from a median of 17 days in the 1980s to 9 days in the 2000s. There were only 10 postoperative/hospital deaths, for a mortality of 1%. A total of 405 patients underwent pancreaticoduodenectomy for adenocarcinoma of the head of the pancreas. Overall 5-year survival was 18%; for the lymph node-negative patients, it was 32%; and for node-negative, margin-negative patients, it was 41%. Pancreaticoduodenectomy has become a commonly performed operation in many tertiary care centers. Operative time, blood loss, and length of stay have dropped substantially. The operation has become safe, with a low hospital mortality. It has become an effective operation for pancreatic cancer in those patients in whom their tumor is margin negative and node negative.

Impact of total lymph node count on staging and survival after gastrectomy for gastric cancer: data from a large US-population database.

RODERICH SCHWARZ,  Jürgen R Schwarz,  Jeffrey Smith (2005)
Prognosis of potentially curable (M0), completely resected gastric cancer is primarily determined by pathologic T and N staging criteria. The optimal regional dissection extent during gastrectomy for gastric adenocarcinoma continues to be debated. A gastric cancer data set was created through structured queries to the Surveillance, Epidemiology, and End Results database (1973 to 1999). Relationships between the number of lymph nodes (LNs) examined and survival were analyzed for the stage subgroups T1/2N0, T1/2N1, T3N0, and T3N1. In every stage subgroup, overall survival was highly dependent on the number of LNs examined. Multivariate prognostic variables in the T1/2N0M0 subgroup were number of LNs examined, age (for both, P < .0001), race (P = .0004), sex (P = .0006), and tumor size (P = .02). A linear trend for superior survival based on more LNs examined could be confirmed for all four stage subgroups. Baseline model-predicted 5-year survival with only one LN examined was 56% (T1/2N0), 35% (T1/2N1), 29% (T3N0), or 13% (T3N1). For every 10 extra LNs dissected, survival improved by 7.6% (T1/2N0), 5.7% (T1/2N1), 11% (T3N0), or 7% (T3N1). A cut-point analysis yielded the greatest survival difference at 10 LNs examined but continued to detect significantly superior survival differences for cut points at up to 40 LNs, always in favor of more LNs examined. Although the impact of stage migration versus improved regional disease control cannot be separated on basis of the available information, the data provide support in favor of extended lymphadenectomy during potentially curative gastrectomy for gastric cancer.