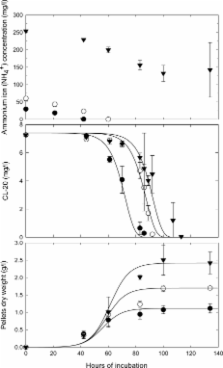 The aerobic biodegradability of the high explosive CL-20 by activated sludge and the white rot fungus Phanerochaete chrysosporium has been investigated. Although activated sludge is not effective in degrading CL-20 directly, it can mineralize the alkaline hydrolysis products. Phanerochaete chrysosporium degrades CL-20 in the presence of supplementary carbon and nitrogen sources. Biodegradation studies were conducted using various nutrient media under diverse conditions. Variables included the CL-20 concentration; levels of carbon (as glycerol) and ammonium sulfate and yeast extract as sources of nitrogen. Cultures that received CL-20 at the time of inoculation transformed CL-20 completely under all nutrient conditions studied. When CL-20 was added to pre-grown cultures, degradation was limited. The extent of mineralization was monitored by the 14CO 2 time evolution; up to 51% mineralization was achieved when the fungus was incubated with [ 14C]-CL-20. The kinetics of CL-20 biodegradation by Phanerochaete chrysosporium follows the logistic kinetic growth model.

S S Talmage,  P Caswell-Reno,  Nicola C. Maxwell … (1998)
Available data on the occurrence, transport, transformation, and toxicity of eight nitroaromatic munition compounds and their degradation products, TNT, TNB, DNB, DNA, 2-ADNT, RDX, HMX, and tetryl were used to identify potential fate in the environment and to calculate screening benchmarks or safe environmental levels for aquatic and terrestrial organisms. Results of monitoring studies revealed that some of these compounds persist at sites where they were produced or processed. Most of the compounds are present in soil, sediment, and surface water or groundwater at military sites. Soil adsorption coefficients indicate that these chemicals are only moderately adsorbed to soil and may leach to groundwater. Most of these compounds are transformed by abiotic or biotic mechanisms in environmental media. Primary transformation mechanisms involve photolysis (TNT, RDX, HMX, tetryl), hydrolysis (tetryl), and microbial degradation (TNT, TNB, DNB, DNA, 2-ADNT, and HMX). Microbial degradation for both nitro and nitramine aromatic compounds involves rapid reduction of nitro groups to amino groups, but further metabolism is slow. With the exception of DNB, complete mineralization did not usually occur under the conditions of the studies. RDX was resistant to microbial degradation. Available ecotoxicological data on acute and chronic studies with freshwater fish and invertebrates were summarized, and water quality criteria or ecotoxicological screening benchmarks were developed. Depending on the available data, criteria/benchmarks were calculated according to USEPA Tier I or Tier II guidelines. The munitions chemicals are moderately to highly toxic to freshwater organisms, with chronic screening values < 1 mg/L. For some chemicals, these low values are caused by inherent toxicity; in other cases, they result from the conservative methods used in the absence of data. For nonionic organic munitions chemicals, sediment quality benchmarks were calculated (based on Kow values and the final chronic value) according to USEPA guidelines. Available data indicate that none of the compounds is expected to bioconcentrate. In the same manner in which reference doses for humans are based on studies with laboratory animals, reference doses or screening benchmarks for wildlife may also be calculated by extrapolation among mammalian species. Chronic NOAELs for the compounds of interest were determined from available laboratory studies. Endpoints selected for wildlife species were those that diminish population growth or survival. Equivalent NOAELs for wildlife were calculated by scaling the test data on the basis of differences in body weight. Data on food and water intake for seven selected wildlife species--short-tailed shrew, white-footed mouse, meadow vole, cottontail rabbit, mink, red fox, and whitetail deer--were used to calculate NOAELs for oral intake. In the case of TNB, a comparison of toxicity data from studies conducted with both the white-footed mouse and the laboratory rat indicates that the white-footed mouse may be more resistant to the toxic effects of chemicals than the laboratory rat and may further indicate the lesser sensitivity of wildlife species to chemical insult. Chronic NOAEL values for the test species based on the laboratory studies indicate that, by the oral route of exposure, TNB and RDX are not highly toxic to mammalian species. However, as seen with TNB, values are less conservative when chronic studies are available or when studies were conducted with wildlife species. Insufficient data were located to calculate NOAELs for avian species. In the absence of criteria or guidelines for terrestrial plants, invertebrates, and soil heterotrophic processes, LOECs were used as screening benchmarks for effect levels in the environment. In most cases, too few data were available to derive a screening benchmark or to have a high degree of confidence in the benchmarks that were derived. (ABSTRACT TRUNCATED)