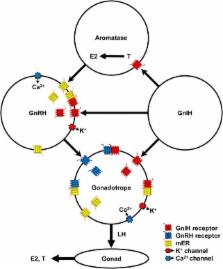 Gonadotropin-inhibitory hormone (GnIH) is a hypothalamic neuropeptide that decreases gonadotropin synthesis and release by directly acting on the gonadotrope or by decreasing the activity of gonadotropin-releasing hormone (GnRH) neurons. GnIH is also called RFamide-related peptide in mammals or LPXRFamide peptide in fishes due to its characteristic C-terminal structure. The primary receptor for GnIH is GPR147 that inhibits cAMP production in target cells. Although most of the studies in mammals, birds, and fish have shown the inhibitory action of GnIH in the hypothalamic–pituitary–gonadal (HPG) axis, several in vivo studies in mammals and many in vivo and in vitro studies in fish have shown its stimulatory action. In mouse, although the firing rate of the majority of GnRH neurons is decreased, a small population of GnRH neurons is stimulated by GnIH. In hamsters, GnIH inhibits luteinizing hormone (LH) release in the breeding season when their endogenous LH level is high but stimulates LH release in non-breeding season when their LH level is basal. Besides different effects of GnIH on the HPG axis depending on the reproductive stages in fish, higher concentration or longer duration of GnIH administration can stimulate their HPG axis. These results suggest that GnIH action in the HPG axis is modulated by sex-steroid concentration, the action of neuroestrogen synthesized by the activity of aromatase stimulated by GnIH, estrogen membrane receptor, heteromerization and internalization of GnIH, GnRH, and estrogen membrane receptors. The inhibitory and stimulatory action of GnIH in the HPG axis may have a physiological role to maintain reproductive homeostasis according to developmental and reproductive stages.

Cloning of a novel receptor expressed in rat prostate and ovary.

Estrogen-induced activation of Erk-1 and Erk-2 requires the G protein-coupled receptor homolog, GPR30, and occurs via trans-activation of the epidermal growth factor receptor through release of HB-EGF.

A Frackelton,  E J Filardo,  J Quinn … (2000)
Estrogen rapidly activates the mitogen-activated protein kinases, Erk-1 and Erk-2, via an as yet unknown mechanism. Here, evidence is provided that estrogen-induced Erk-1/-2 activation occurs independently of known estrogen receptors, but requires the expression of the G protein-coupled receptor homolog, GPR30. We show that 17beta-estradiol activates Erk-1/-2 not only in MCF-7 cells, which express both estrogen receptor alpha (ER alpha) and ER beta, but also in SKBR3 breast cancer cells, which fail to express either receptor. Immunoblot analysis using GPR30 peptide antibodies showed that this estrogen response was associated with the presence of GPR30 protein in these cells. MDA-MB-231 breast cancer cells (ER alpha-, ER beta+) are GPR30 deficient and insensitive to Erk-1/-2 activation by 17beta-estradiol. Transfection of MDA-MB-231 cells with a GPR30 complementary DNA resulted in overexpression of GPR30 protein and conversion to an estrogen-responsive phenotype. In addition, GPR30-dependent Erk-1/-2 activation was triggered by ER antagonists, including ICI 182,780, yet not by 17alpha-estradiol or progesterone. Consistent with acting through a G protein-coupled receptor, estradiol signaling to Erk-1/-2 occurred via a Gbetagamma-dependent, pertussis toxin-sensitive pathway that required Src-related tyrosine kinase activity and tyrosine phosphorylation of tyrosine 317 of the Shc adapter protein. Reinforcing this idea, estradiol signaling to Erk-1/-2 was dependent upon trans-activation of the epidermal growth factor (EGF) receptor via release of heparan-bound EGF (HB-EGF). Estradiol signaling to Erk-1/-2 could be blocked by: 1) inhibiting EGF-receptor tyrosine kinase activity, 2) neutralizing HB-EGF with antibodies, or 3) down-modulating HB-EGF from the cell surface with the diphtheria toxin mutant, CRM-197. Our data imply that ER-negative breast tumors that continue to express GPR30 may use estrogen to drive growth factor-dependent cellular responses.

Graeme Milligan,  Sergi Ferré,  Martin J. Lohse … (2013)
Most evidence indicates that, as for family C G protein-coupled receptors (GPCRs), family A GPCRs form homo- and heteromers. Homodimers seem to be a predominant species, with potential dynamic formation of higher-order oligomers, particularly tetramers. Although monomeric GPCRs can activate G proteins, the pentameric structure constituted by one GPCR homodimer and one heterotrimeric G protein may provide a main functional unit, and oligomeric entities can be viewed as multiples of dimers. It still needs to be resolved if GPCR heteromers are preferentially heterodimers or if they are mostly constituted by heteromers of homodimers. Allosteric mechanisms determine a multiplicity of possible unique pharmacological properties of GPCR homomers and heteromers. Some general mechanisms seem to apply, particularly at the level of ligand-binding properties. In the frame of the dimer-cooperativity model, the two-state dimer model provides the most practical method to analyze ligand-GPCR interactions when considering receptor homomers. In addition to ligand-binding properties, unique properties for each GPCR oligomer emerge in relation to different intrinsic efficacy of ligands for different signaling pathways (functional selectivity). This gives a rationale for the use of GPCR oligomers, and particularly heteromers, as novel targets for drug development. Herein, we review the functional and pharmacological properties of GPCR oligomers and provide some guidelines for the application of discrete direct screening and high-throughput screening approaches to the discovery of receptor-heteromer selective compounds.

Specialty section: This article was submitted to Experimental Endocrinology, a section of the journal Frontiers in Endocrinology