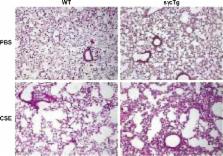 Cigarette smoking (CS) is a major cause of considerable morbidity and mortality by inducing lung cancer and COPD. COPD, a smoking-related disorder, is closely related to the alteration of immune system and inflammatory processes that are specifically mediated by T cells. Soluble common gamma chain (sγc) has recently been identified as a critical regulator of the development and differentiation of T cells. We examined the effects of sγc in a cigarette smoke extract (CSE) mouse model. The sγc level in CSE mice serum is significantly downregulated, and the cellularity of lymph node (LN) is systemically reduced in the CSE group. Overexpression of sγc enhances the cellularity and IFNγ production of CD8 T cells in LN and also enhances Th1 and Th17 differentiation of CD4 T cells in the respiratory tract. Mechanistically, the downregulation of sγc expression mediated by CSE is required to prevent excessive inflammatory T cell responses. Therefore, our data suggest that sγc may be one of the target molecules for the control of immunopathogenic progresses in COPD.

A function for interleukin 2 in Foxp3-expressing regulatory T cells.

Jason D. Fontenot,  Alexander Rudensky,  Marc A Gavin … (2005)
Regulatory T cells (T(reg) cells) expressing the forkhead family transcription factor Foxp3 are critical mediators of dominant immune tolerance to self. Most T(reg) cells constitutively express the high-affinity interleukin 2 (IL-2) receptor alpha-chain (CD25); however, the precise function of IL-2 in T(reg) cell biology has remained controversial. To directly assess the effect of IL-2 signaling on T(reg) cell development and function, we analyzed mice containing the Foxp3(gfp) knock-in allele that were genetically deficient in either IL-2 (Il2(-/-)) or CD25 (Il2ra(-/-)). We found that IL-2 signaling was dispensable for the induction of Foxp3 expression in thymocytes from these mice, which indicated that IL-2 signaling does not have a nonredundant function in the development of T(reg) cells. Unexpectedly, Il2(-/-) and Il2ra(-/-) T(reg) cells were fully able to suppress T cell proliferation in vitro. In contrast, Foxp3 was not expressed in thymocytes or peripheral T cells from Il2rg(-/-) mice. Gene expression analysis showed that IL-2 signaling was required for maintenance of the expression of genes involved in the regulation of cell growth and metabolism. Thus, IL-2 signaling seems to be critically required for maintaining the homeostasis and competitive fitness of T(reg) cells in vivo.

N Sakaguchi,  M Iwata,  T Takahashi … (1998)
Elimination of CD25+ T cells, which constitute 5-10% of peripheral CD4+ T cells in normal naive mice, leads to spontaneous development of various autoimmune diseases. These immunoregulatory CD25+CD4+ T cells are naturally unresponsive (anergic) in vitro to TCR stimulation, and, upon stimulation, suppress proliferation of CD25-CD4+ T cells and CD8+ T cells. The antigen concentration required for stimulating CD25+CD4+ T cells to exert suppression is much lower than that required for stimulating CD25-CD4+ T cells to proliferate. The suppression, which results in reduced IL-2 production by CD25-CD4+ T cells, is dependent on cellular interactions on antigen-presenting cells (and not mediated by far-reaching or long-lasting humoral factors or apoptosis-inducing signals) and antigen non-specific in its effector phase. Addition of high doses of IL-2 or anti-CD28 antibody to the in vitro T cell stimulation culture not only breaks the anergic state of CD25+CD4+ T cells, but also abrogates their suppressive activity simultaneously. Importantly, the anergic/suppressive state of CD25+CD4+ T cells appeared to be their basal default condition, since removal of IL-2 or anti-CD28 antibody from the culture milieu allows them to revert to the original anergic/suppressive state. Furthermore, transfer of such anergy/suppression-broken T cells from normal mice produces various autoimmune diseases in syngeneic athymic nude mice. These results taken together indicate that one aspect of immunologic self-tolerance is maintained by this unique CD25+CD4+ naturally anergic/suppressive T cell population and its functional abnormality directly leads to the development of autoimmune disease.