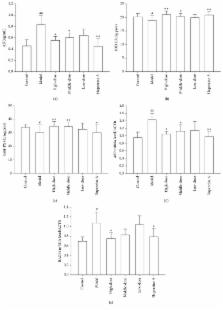 Chinese medicine has been used for Alzheimer's disease (AD) treatment for thousands of years with more effective and fewer side effects. Therefore, developing effective potential candidates from Chinese medicine against AD would be considered as critical and efficient therapy for AD treatment. This study was designed to evaluate the neuronal protective effect of fraction n-butanol (NB) of Radix Notoginseng on A β 25–35-induced PC12 cells, explore the effect of the tested fraction on spatial learning and memory, and characterize the impacts of fraction NB on antioxidant enzymes, A β production, and APP and BACE1 expressions. The results revealed that fraction NB could promote proliferation of PC12 cells and protect and rescue PC12 cells from A β 25–35-induced cell death. Moreover, fraction NB could improve spatial learning and memory impairments of senescence-accelerated prone8 (SAMP8) mice and attenuate oxidative stress and reduce the production of A β by inhibiting the expressions of APP and BACE1 in the brains of SAMP8 mice. The result of single dose acute toxicity assay showed that fraction NB had a mild toxicity in vivo. The pronounced actions against AD and in vivo low toxicity of fraction NB suggest that fraction NB may be a useful alternative to the current AD treatment.

Richard Morris (1984)
Developments of an open-field water-maze procedure in which rats learn to escape from opaque water onto a hidden platform are described. These include a procedure (A) for automatically tracking the spatial location of a hooded rat without the use of attached light-emitting diodes; (B) for studying different aspects of spatial memory (e.g. working memory); and (C) for studying non-spatial discrimination learning. The speed with which rats learn these tasks suggests that they may lend themselves to a variety of behavioural investigations, including pharmacological work and studies of cerebral function.

Advanced glycation endproducts and their receptor RAGE in Alzheimer's disease.

Velandai K Srikanth,  Annette Maczurek,  Thanh Binh Phan … (2011)
Alzheimer's disease (AD) is the most common dementing disorder of late life. Although there might be various different triggering events in the early stages of the disease, they seem to converge on a few characteristic final pathways in the late stages, characterized by inflammation and neurodegeneration. In this review, we revisit the hypothesis that advanced glycation endproducts (AGEs) and their receptor RAGE may play an important role in disease pathogenesis. Accumulation of AGEs in cells and tissues is a normal feature of aging, but is accelerated in AD. In AD, AGEs can be detected in pathological deposits such as amyloid plaques and neurofibrillary tangles. AGEs explain many of the neuropathological and biochemical features of AD such as extensive protein crosslinking, glial induction of oxidative stress and neuronal cell death. Oxidative stress and AGEs initiate a positive feedback loop, where normal age-related changes develop into a pathophysiological cascade. RAGE and its decoy receptor soluble RAGE, may contribute to or protect against AD pathogenesis by influencing transport of β-amyloid into the brain or by manipulating inflammatory mechanisms. Targeted pharmacological interventions using AGE-inhibitors, RAGE-antagonists, RAGE-antibodies, soluble RAGE or RAGE signalling inhibitors such as membrane-permeable antioxidants may be promising therapeutic strategies to slow down the progression of AD. Copyright © 2009 Elsevier Inc. All rights reserved.