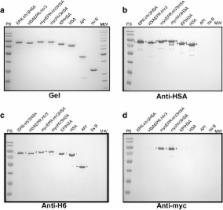 Hirudin is a potent thrombin inhibitor but its antithrombotic properties are offset by bleeding side-effects. Because hirudin’s N-terminus must engage thrombin’s active site for effective inhibition, fusing a cleavable peptide at this site may improve hirudin’s risk/benefit ratio as a therapeutic agent. Previously we engineered a plasmin cleavage site (C) between human serum albumin (HSA) and hirudin variant 3 (HV3) in fusion protein HSACHV3. Because coagulation factor XI (FXI) is more involved in thrombosis than hemostasis, we hypothesized that making HV3 activity FXIa-dependent would also improve HV3’s potential therapeutic profile. We combined albumin fusion for half-life extension of hirudin with positioning of an FXIa cleavage site N-terminal to HV3, and assessed in vitro and in vivo properties of this novel protein.

Harry Büller,  Claudette Bethune,  Sanjay Bhanot … (2015)
Experimental data indicate that reducing factor XI levels attenuates thrombosis without causing bleeding, but the role of factor XI in the prevention of postoperative venous thrombosis in humans is unknown. FXI-ASO (ISIS 416858) is a second-generation antisense oligonucleotide that specifically reduces factor XI levels. We compared the efficacy and safety of FXI-ASO with those of enoxaparin in patients undergoing total knee arthroplasty.

Laura Anderson,  Glen Hortin,  Denis Sviridov (2008)
Plasma contains thousands of proteins, but a small number of these proteins comprise the majority of protein molecules and mass. We surveyed proteomic studies to identify candidates for high-abundance polypeptide chains. We searched the literature for information on the plasma concentrations of the most abundant components in healthy adults and for the molecular mass of the mature polypeptide chains in plasma. Because proteomic studies usually dissociate proteins into polypeptide chains or detect short peptide segments of proteins, we summarized data on individual peptide chains for proteins containing multiple subunits or polypeptides. We collected data on about 150 of the most abundant polypeptides in plasma. The abundant polypeptides span approximately the top 4 logs of concentration in plasma, from 650 to 0.06 micromol/L on a molar basis or from about 50,000 to 1 mg/L mass abundance. Data on the concentrations of the high-abundance peptide chains in plasma assist in understanding the composition of plasma and potential approaches for clinical laboratory or proteomic analysis of plasma proteins. Development of more extensive databases regarding the plasma concentrations of proteins in health and diseases would promote diagnostic and proteomic advances.

Refined structure of the hirudin-thrombin complex.

Timothy Rydel,  Alexander Tulinsky,  Wolfram Bode … (1991)
The structure of a recombinant hirudin (variant 2, Lys47) human alpha-thrombin complex has been refined using restrained least-squares methods to a crystallographic R-factor of 0.173. The hirudin structure consists of an N-terminal domain folded into a globular unit and a long 17-peptide C-terminal in an extended chain conformation. The N-terminal domain binds at the active-site of thrombin where Ile1' to Tyr3' penetrates to the catalytic triad. The alpha-amino group of Ile1' of hirudin makes a hydrogen bond with OG of Ser195 of thrombin, the side-chains of Ile1' and Tyr3' occupy the apolar site, Thr2' is at the entrance to, but does not enter, the S1 specificity site and Ile1' to Tyr3' form a parallel beta-strand with Ser214 to Gly219. The latter interaction is antiparallel in all other serine proteinase-protein inhibitor complexes. The extended C-terminal segment of hirudin, which is abundant in acidic residues, makes many electrostatic interactions with the fibrinogen binding exosite while the last five residues are in a 3(10) helical turn residing in a hydrophobic patch on the thrombin surface. The precision of the complementarity displayed by these two molecules produces numerous interactions, which although independently generally weak, together are responsible for the high degree of affinity and specificity. Although hirudin-thrombin and D-Phe-Pro-Arg-chloromethyl ketone-thrombin differ in conformation in the autolysis loop (Lys145 to Gly150), this is most likely due to different crystal packing interactions and changes in circular dichroism between the two are probably due to the inherent flexibility of the loop. An RGD sequence, which is generally known to be involved in cell surface receptor interactions, occurs in thrombin and is associated with a long solvent channel filled with water molecules leading to the surface from the end of the S1 site. However, the RGD triplet does not appear to be able to interact in concert in a surface binding mode.