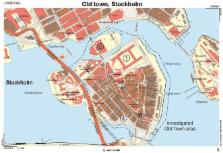 Exposure to radiofrequency (RF) radiation was classified as a possible human carcinogen, Group 2B, by the International Agency for Research on Cancer at WHO in 2011. The exposure pattern is changing due to the rapid development of technology. Outdoor RF radiation level was measured during five tours in Stockholm Old Town in April, 2016 using the EME Spy 200 exposimeter with 20 predefined frequencies. The results were based on 10,437 samples in total. The mean level of the total RF radiation was 4,293 µW/m 2 (0.4293 µW/cm 2). The highest mean levels were obtained for global system for mobile communications (GSM) + universal mobile telecommunications system (UMTS) 900 downlink and long-term evolution (LTE) 2600 downlink (1,558 and 1,265 µW/m 2, respectively). The town squares displayed highest total mean levels, with the example of Järntorget square with 24,277 µW/m 2 (min 257, max 173,302 µW/m 2). These results were in large contrast to areas with lowest total exposure, such as the Supreme Court, with a mean level of 404 µW/m 2 (min 20.4, max 4,088 µW/m 2). In addition, measurements in the streets surrounding the Royal Castle were lower than the total for the Old Town, with a mean of 756 µW/m 2 (min 0.3, max 50,967 µW/m 2). The BioInitiative 2012 Report defined the scientific benchmark for possible health risks as 30–60 µW/m 2. Our results of outdoor RF radiation exposure at Stockholm Old Town are significantly above that level. The mean exposure level at Järntorget square was 405-fold higher than 60 µW/m 2. Our results were below the reference level on 10,000,000 µW/m 2 established by the International Commission on Non-Ionizing Radiation Protection (ICNIRP), which, however, are less credible, as they do not take non-thermal effects into consideration and are not based on sound scientific evaluation. Our highest measured mean level at Järntorget was 0.24% of the ICNIRP level. A number of studies have found adverse, non-thermal (no measurable temperature increase) health effects far below the ICNIRP guidelines.

Brain tumour risk in relation to mobile telephone use: results of the INTERPHONE international case-control study.

Neil Pearce (2010)
The rapid increase in mobile telephone use has generated concern about possible health risks related to radiofrequency electromagnetic fields from this technology. An interview-based case-control study with 2708 glioma and 2409 meningioma cases and matched controls was conducted in 13 countries using a common protocol. A reduced odds ratio (OR) related to ever having been a regular mobile phone user was seen for glioma [OR 0.81; 95% confidence interval (CI) 0.70-0.94] and meningioma (OR 0.79; 95% CI 0.68-0.91), possibly reflecting participation bias or other methodological limitations. No elevated OR was observed > or =10 years after first phone use (glioma: OR 0.98; 95% CI 0.76-1.26; meningioma: OR 0.83; 95% CI 0.61-1.14). ORs were or =1640 h, the OR was 1.40 (95% CI 1.03-1.89) for glioma, and 1.15 (95% CI 0.81-1.62) for meningioma; but there are implausible values of reported use in this group. ORs for glioma tended to be greater in the temporal lobe than in other lobes of the brain, but the CIs around the lobe-specific estimates were wide. ORs for glioma tended to be greater in subjects who reported usual phone use on the same side of the head as their tumour than on the opposite side. Overall, no increase in risk of glioma or meningioma was observed with use of mobile phones. There were suggestions of an increased risk of glioma at the highest exposure levels, but biases and error prevent a causal interpretation. The possible effects of long-term heavy use of mobile phones require further investigation.

Leif Salford,  Arne E Brun,  Jacob L Eberhardt … (2003)
The possible risks of radio-frequency electromagnetic fields for the human body is a growing concern for our society. We have previously shown that weak pulsed microwaves give rise to a significant leakage of albumin through the blood-brain barrier. In this study we investigated whether a pathologic leakage across the blood-brain barrier might be combined with damage to the neurons. Three groups each of eight rats were exposed for 2 hr to Global System for Mobile Communications (GSM) mobile phone electromagnetic fields of different strengths. We found highly significant (p< 0.002) evidence for neuronal damage in the cortex, hippocampus, and basal ganglia in the brains of exposed rats.