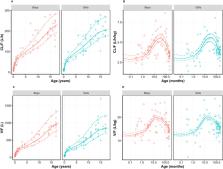 The main aim of this analysis was to characterize the pharmacokinetics (PK) of tapentadol in pediatric patients from birth to <18 years old who experience acute pain, requiring treatment with an opioid analgesic.

Data from four clinical trials and 148 pediatric patients who received a single dose of tapentadol oral or intravenous solution were included. Population PK analysis was performed to determine the contribution of size-related (bodyweight) and function-related (maturation) factors to the changes in oral bioavailability (F), volume of distribution (V), and clearance (CL) with age. Simulations were carried out to compare pediatric exposures to reference adult values.

A one-compartment model with allometric scaling on disposition parameters (using theoretical or estimated exponents) and maturation functions on CL and F best described tapentadol PK. The estimated allometric exponents for CL (0.603) and V (0.820) differed slightly from the theoretical values of 0.75 for CL and 1 for V. A maximum in CL/F was observed at about 2–3 years when expressed on a bodyweight basis. Results for younger children as well as the F estimate were sensitive to the scaling approach, but CL/F and V/F as a function of age for the two scaling approaches led to similar curves within the bioequivalence range except below 5 weeks of age. Model-based simulations indicated that the doses used in the included clinical trials lead to exposures within the lower half of the targeted adult exposure.

The development of tapentadol is one of the first examples following a systematic approach for analgesic drug development for children. Our analysis enabled a full characterization and robust understanding of tapentadol PK in children from birth to <18 years, including preterm infants, and showed the importance of evaluating the sensitivity of the inferences of the PK parameters to the selected scaling approach.

The UDP-glucuronosyltransferases: their role in drug metabolism and detoxification.

Andrew Rowland,  John Miners,  Darryl MacKenzie (2013)
Human UDP-glucuronosyltransferase (UGT) exists as a superfamily of 22 proteins, which are divided into 5 families and 6 subfamilies on the basis of sequence identity. Members of the UGT1A and 2B subfamilies play a key role in terminating the biological actions and enhancing the renal elimination of non-polar (lipophilic) drugs from all therapeutic classes. These enzymes primarily catalyse the covalent linkage of glucuronic acid, derived from the cofactor UDP-glucuronic acid, to a substrate with a suitable acceptor functional group. This process is referred to as glucuronidation. While the liver is the major detoxification organ, and as such contains the greatest abundance and diversity of UGTs, these enzymes also exhibit significant, but variable extra-hepatic expression. This review discusses recent advances in the understanding of the functional roles of UGT, their regulation and tissue expression, and clinical significant factors (ontogeny, interactions and polymorphisms) that affect glucuronidation activity in humans. Copyright © 2013 Elsevier Ltd. All rights reserved.

A pharmacokinetic standard for babies and adults.

Nick Holford,  Young-A Heo,  Brian Anderson (2013)
The pharmacokinetic behavior of medicines used in humans follows largely predictable patterns across the human age range from premature babies to elderly adults. Most of the differences associated with age are in fact due to differences in size. Additional considerations are required to describe the processes of maturation of clearance processes and postnatal changes in body composition. Application of standard approaches to reporting pharmacokinetic parameters is essential for comparative human pharmacokinetic studies from babies to adults. A standardized comparison of pharmacokinetic parameters obtained in children and adults is shown for 46 drugs. Appropriate size scaling shows that children (over 2 years old) are similar to adults. Maturation changes are generally completed within the first 2 years of postnatal life; consequently babies may be considered as immature children, whereas children are just small adults.

Edwin van den Oord,  J. Leeder,  S Wildt … (1999)
During human development impressive changes in drug disposition occur. An important determinant of drug clearance is metabolism, something that is not only determined by ontogenic regulation but also by genetic processes which add to the variability of drug metabolism during different stages of childhood. Therefore, an understanding of the developmental regulation of different metabolic pathways, together with information on the genetic determinants of drug metabolism, will increase the knowledge of inter- and intraindividual variability in drug disposition during childhood. Conjugation has historically received less attention than cytochrome P450 metabolism. An important group of conjugation reactions are catalysed by the uridine 5'-diphosphate (UDP)-glucuronosyltransferases (UGTs); to date at least 10 different UGT isoforms have been identified. The UGTs are not only involved in the metabolism of many drugs [e.g. morphine, paracetamol (acetaminophen)] but also capable of the biotransformation of important endogenous substrates (e.g. bilirubin, ethinylestradiol) and several xenobiotics. Isoform specificity for these substrates has, however, not been fully characterised. Serious adverse events associated with chloramphenicol toxicity in the neonate have highlighted the importance of developmental changes in UGT activity. However, isoform-specific differences preclude the generalisation of a simple developmental pattern for UGT activity. UGT2B7 is the only UGT isoform for which ontogeny has been characterised both in vitro and in vivo, using morphine as the probe drug. However, no general developmental pattern for the individual UGT isoforms which might be of value for the clinician is currently available. Genetic polymorphisms have been identified for the UGT family. Not only for the UGT1A gene, which reduces bilirubin glucuronidation, leading to genetic hyperbilirubinaemia (the Crigler-Najjar and Gilbert's syndromes), but also for 3 other UGT isoforms. However, the impact of these genetic differences on drug metabolism remains to be established because of overlapping isoform specificity of the drugs studied, as well as a lack of specific probe substrates to test the activity of individual UGT isoforms in relation to these gene mutations. Clearly, an information gap exists regarding the developmental and genetic aspects of UGT regulation and its potential impact on therapy. More research is needed on the pharmacogenetics and ontogeny of the UGTs for effective translation of scientific information into clinically applicable knowledge.