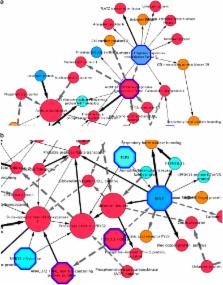 The shoot structure of cultivated grapevine Vitis vinifera L. typically exhibits a three-node modular repetitive pattern, two sequential leaf-opposed tendrils followed by a tendril-free node. In this study, we investigated the molecular basis of this pattern by characterizing differentially expressed genes in 10 bulk samples of young tendril tissue from two grapevine populations showing segregation of mutant or wild-type shoot/tendril phyllotaxy. One population was the selfed progeny and the other one, an outcrossed progeny of a Vitis hybrid, ‘Roger’s Red’. We analyzed 13 375 expressed genes and carried out in-depth analyses of 324 of them, which were differentially expressed with a minimum of 1.5-fold changes between the mutant and wild-type bulk samples in both selfed and cross populations. A significant portion of these genes were direct cis-binding targets of 14 transcription factor families that were themselves differentially expressed. Network-based dependency analysis further revealed that most of the significantly rewired connections among the 10 most connected hub genes involved at least one transcription factor. TCP3 and MYB12, which were known important for plant-form development, were among these transcription factors. More importantly, TCP3 and MYB12 were found in this study to be involved in regulating the lignin gene PRX52, which is important to plant-form development. A further support evidence for the roles of TCP3-MYB12-PRX52 in contributing to tendril phyllotaxy was the findings of two other lignin-related genes uniquely expressed in the mutant phyllotaxy background.

Genome-wide analysis of the ERF gene family in Arabidopsis and rice.

Tatsuhito Fujimura,  Hideaki Shinshi,  Toshitsugu Nakano … (2006)
Genes in the ERF family encode transcriptional regulators with a variety of functions involved in the developmental and physiological processes in plants. In this study, a comprehensive computational analysis identified 122 and 139 ERF family genes in Arabidopsis (Arabidopsis thaliana) and rice (Oryza sativa L. subsp. japonica), respectively. A complete overview of this gene family in Arabidopsis is presented, including the gene structures, phylogeny, chromosome locations, and conserved motifs. In addition, a comparative analysis between these genes in Arabidopsis and rice was performed. As a result of these analyses, the ERF families in Arabidopsis and rice were divided into 12 and 15 groups, respectively, and several of these groups were further divided into subgroups. Based on the observation that 11 of these groups were present in both Arabidopsis and rice, it was concluded that the major functional diversification within the ERF family predated the monocot/dicot divergence. In contrast, some groups/subgroups are species specific. We discuss the relationship between the structure and function of the ERF family proteins based on these results and published information. It was further concluded that the expansion of the ERF family in plants might have been due to chromosomal/segmental duplication and tandem duplication, as well as more ancient transposition and homing. These results will be useful for future functional analyses of the ERF family genes.

Christophe Maris,  Cyril Dominguez,  Frédéric Allain (2005)
The RNA recognition motif (RRM), also known as RNA-binding domain (RBD) or ribonucleoprotein domain (RNP) is one of the most abundant protein domains in eukaryotes. Based on the comparison of more than 40 structures including 15 complexes (RRM-RNA or RRM-protein), we reviewed the structure-function relationships of this domain. We identified and classified the different structural elements of the RRM that are important for binding a multitude of RNA sequences and proteins. Common structural aspects were extracted that allowed us to define a structural leitmotif of the RRM-nucleic acid interface with its variations. Outside of the two conserved RNP motifs that lie in the center of the RRM beta-sheet, the two external beta-strands, the loops, the C- and N-termini, or even a second RRM domain allow high RNA-binding affinity and specific recognition. Protein-RRM interactions that have been found in several structures reinforce the notion of an extreme structural versatility of this domain supporting the numerous biological functions of the RRM-containing proteins.

John Manners,  Peer M. Schenk,  Bruno Dombrecht … (2007)
The Arabidopsis thaliana basic helix-loop-helix Leu zipper transcription factor (TF) MYC2/JIN1 differentially regulates jasmonate (JA)-responsive pathogen defense (e.g., PDF1.2) and wound response (e.g., VSP) genes. In this study, genome-wide transcriptional profiling of wild type and mutant myc2/jin1 plants followed by functional analyses has revealed new roles for MYC2 in the modulation of diverse JA functions. We found that MYC2 negatively regulates Trp and Trp-derived secondary metabolism such as indole glucosinolate biosynthesis during JA signaling. Furthermore, MYC2 positively regulates JA-mediated resistance to insect pests, such as Helicoverpa armigera, and tolerance to oxidative stress, possibly via enhanced ascorbate redox cycling and flavonoid biosynthesis. Analyses of MYC2 cis binding elements and expression of MYC2-regulated genes in T-DNA insertion lines of a subset of MYC2-regulated TFs suggested that MYC2 might modulate JA responses via differential regulation of an intermediate spectrum of TFs with activating or repressing roles in JA signaling. MYC2 also negatively regulates its own expression, and this may be one of the mechanisms used in fine-tuning JA signaling. Overall, these results provide new insights into the function of MYC2 and the transcriptional coordination of the JA signaling pathway.