Biogeographical and evolutionary importance of the European high mountain systems 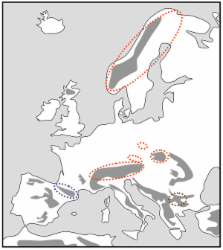 Europe is characterised by several high mountain systems dominating major parts of its area, and these structures have strongly influenced the evolution of taxa. For species now restricted to these high mountain systems, characteristic biogeographical patterns of differentiation exist. (i) Many local endemics are found in most of the European high mountain systems especially in the Alps and the more geographically peripheral regions of Europe. Populations isolated in these peripheral mountain ranges often have strongly differentiated endemic genetic lineages, which survived and evolved in the vicinity of these mountain areas over long time periods. (ii) Populations of taxa with wide distributions in the Alps often have two or more genetic lineages, which in some cases even have the status of cryptic species. In many cases, these lineages are the results of several centres of glacial survival in the perialpine areas. Similar patterns also apply to the other geographically extended European high mountain systems, especially the Pyrenees and Carpathians. (iii) Populations from adjoining high mountain systems often show similar genetic lineages, a phenomenon best explained by postglacial retreat to these mountains from one single differentiation centre between them. (iv) The populations of a number of species show gradients of genetic diversity from a genetically richer East to a poorer West. This might indicate better glacial survival conditions for this biogeographical group of species in the more eastern parts of Europe.

Some genetic consequences of ice ages, and their role in divergence and speciation

Molecular evidence for glacial refugia of mountain plants in the European Alps.

P Schönswetter,  I Stehlik,  R Holderegger … (2005)
Many mountain ranges have been strongly glaciated during the Quaternary ice ages, and the locations of glacial refugia of mountain plants have been debated for a long time. A series of detailed molecular studies, investigating intraspecific genetic variation of mountain plants in the European Alps, now allows for a first synopsis. A comparison of the phylogeographic patterns with geological and palaeoenvironmental data demonstrates that glacial refugia were located along the southwestern, southern, eastern and northern border of the Alps. Additional glacial refugia were present in central Alpine areas, where high-elevation plants survived the last glaciation on ice-free mountain tops. The observed intraspecific phylogeographies suggest general patterns of glacial survival, which conform to well-known centres of Alpine species diversity and endemism. This implies that evolutionary or biogeographic processes induced by climatic fluctuations act on gene and species diversity in a similar way.

Trees or no trees? The environments of central and eastern Europe during the Last Glaciation