Evidence of both systemic inflammation and neuroinflammation in fibromyalgia patients, as assessed by a multiplex protein panel applied to the cerebrospinal fluid and to plasma 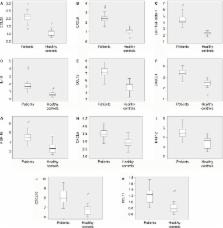 In addition to central hyperexcitability and impaired top–down modulation, chronic inflammation probably plays a role in the pathophysiology of fibromyalgia (FM). Indeed, on the basis of both animal experiments and human studies involving the analysis of cytokines and other inflammation-related proteins in different body fluids, neuroinflammatory mechanisms are considered to be central to the pathophysiology of many chronic pain conditions. However, concerning FM, previous human plasma/serum and/or cerebrospinal fluid (CSF) cytokine studies have looked only at a few predetermined cytokine candidates. Instead of analyzing only a few substances at a time, we used a new multiplex protein panel enabling simultaneous analysis of 92 inflammation-related proteins. Hence, we investigated the CSF and plasma inflammatory profiles of 40 FM patients compared with CSF from healthy controls (n=10) and plasma from blood donor controls (n=46). Using multivariate data analysis by projection, we found evidence of both neuroinflammation (as assessed in CSF) and chronic systemic inflammation (as assessed in plasma). Two groups of proteins (one for CSF and one for plasma) highly discriminating between patients and controls are presented. Notably, we found high levels of CSF chemokine CX3CL1 (also known as fractalkine). In addition, previous findings concerning IL-8 in FM were replicated, in both CSF and plasma. This is the first time that such an extensive inflammatory profile has been described for FM patients. Hence, FM seems to be characterized by objective biochemical alterations, and the lingering characterization of its mechanisms as essentially idiopathic or even psychogenic should be seen as definitively outdated.

Pathological pain and the neuroimmune interface.

Peter M. Grace,  Mark R. Hutchinson,  Steven Maier … (2014)
Reciprocal signalling between immunocompetent cells in the central nervous system (CNS) has emerged as a key phenomenon underpinning pathological and chronic pain mechanisms. Neuronal excitability can be powerfully enhanced both by classical neurotransmitters derived from neurons, and by immune mediators released from CNS-resident microglia and astrocytes, and from infiltrating cells such as T cells. In this Review, we discuss the current understanding of the contribution of central immune mechanisms to pathological pain, and how the heterogeneous immune functions of different cells in the CNS could be harnessed to develop new therapeutics for pain control. Given the prevalence of chronic pain and the incomplete efficacy of current drugs--which focus on suppressing aberrant neuronal activity--new strategies to manipulate neuroimmune pain transmission hold considerable promise.

Interactions between the immune and nervous systems in pain.

Ronald Dubner,  Ke Ren (2010)
Immune cells and glia interact with neurons to alter pain sensitivity and to mediate the transition from acute to chronic pain. In response to injury, resident immune cells are activated and blood-borne immune cells are recruited to the site of injury. Immune cells not only contribute to immune protection but also initiate the sensitization of peripheral nociceptors. Through the synthesis and release of inflammatory mediators and interactions with neurotransmitters and their receptors, the immune cells, glia and neurons form an integrated network that coordinates immune responses and modulates the excitability of pain pathways. The immune system also reduces sensitization by producing immune-derived analgesic and anti-inflammatory or proresolution agents. A greater understanding of the role of the immune system in pain processing and modulation reveals potential targets for analgesic drug development and new therapeutic opportunities for managing chronic pain.

Muscles and their myokines.

Bente Pedersen (2011)
In the past, the role of physical activity as a life-style modulating factor has been considered as that of a tool to balance energy intake. Although it is important to avoid obesity, physical inactivity should be discussed in a much broader context. There is accumulating epidemiological evidence that a physically active life plays an independent role in the protection against type 2 diabetes, cardiovascular diseases, cancer, dementia and even depression. For most of the last century, researchers sought a link between muscle contraction and humoral changes in the form of an 'exercise factor', which could be released from skeletal muscle during contraction and mediate some of the exercise-induced metabolic changes in other organs such as the liver and the adipose tissue. We have suggested that cytokines or other peptides that are produced, expressed and released by muscle fibres and exert autocrine, paracrine or endocrine effects should be classified as 'myokines'. Given that skeletal muscle is the largest organ in the human body, our discovery that contracting skeletal muscle secretes proteins sets a novel paradigm: skeletal muscle is an endocrine organ producing and releasing myokines, which work in a hormone-like fashion, exerting specific endocrine effects on other organs. Other myokines work via paracrine mechanisms, exerting local effects on signalling pathways involved in muscle metabolism. It has been suggested that myokines may contribute to exercise-induced protection against several chronic diseases.