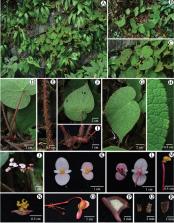 A new species of Begonia section Coelocentrum , B. guangdongensis W.H. Tu, B.M. Wang & Y.L. Li from Guangdong Province, China, is described and illustrated here. Morphologically, the new species is most similar to B. biflora T. C. Ku and B. longistyla Y. M. Shui & W. H. Chen, but differs from B. biflora by its rugose leaves and glabrous capsules and from B. longistyla by its glabrous stipules without ciliate margin, densely hirsute-pilose leaves and obtuse apex of bracts. Additionally, it is also somewhat similar to B. chongzuoensis Yan Liu, S. M. Ku & C.-I Peng, but there are significant distinctions in their stipules, leaves and bracts. The conservation status of B. guangdongensis is assessed as Critically Endangered (CR), according to the IUCN Red List Categories and Criteria.

M M Hughes,  P Hollingsworth (2008)
Begonia is one of the largest angiosperm genera, containing over 1500 species. Some aspects of the distribution of biodiversity in the genus, such as the geographical restrictions of monophyletic groups, the rarity and morphological variability of widespread species, and a preponderance of narrow endemics, suggest that restricted gene flow may have been a factor in the formation of so many species. In order to investigate whether this inference based on large-scale patterns is supported by data at the population level, we examined the distribution of genetic variation within Begonia sutherlandii in the indigenous forests of Kwazulu-Natal, South Africa, using microsatellite markers. Despite the species being predominantly outbreeding, we found high and significant levels of population structure (standardized =F'ST= 0.896). Even within individual populations, there was evidence for clear differentiation of subpopulations. There is thus congruence in evolutionary patterns ranging from interspecific phylogeny, the distribution of individual species, to the levels of population differentiation. Despite this species-rich genus showing a pan-tropical distribution, these combined observations suggest that differentiation occurs over very local scales. Although strongly selected allelic variants can maintain species cohesion with only low levels of gene flow, we hypothesize that in Begonia, gene flow levels are often so low, that divergence in allopatry is likely to be a frequent occurrence, and the lack of widespread species may in part be attributable to a lack of a mechanism for holding them together.

Phylogenetic Relationships of Asian Begonia, with an Emphasis on the Evolution of Rain-ballist and Animal Dispersal Mechanisms in Sections Platycentrum, Sphenanthera and Leprosae

Guangdong Wildlife Protection and Management Project of Forestry Bureau of Guangdong Province in 2019 and Natural Science Foundation of China (Grant No. 31800166)