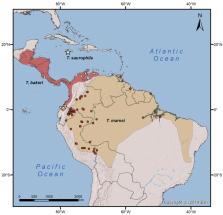 The Stripe-headed Round-eared bat, Tonatia saurophila , includes three subspecies: Tonatia saurophila saurophila (known only from subfossil records in Jamaica), Tonatia saurophila bakeri (distributed from southeastern Mexico to northern Colombia, Venezuela west and north of the Cordillera de Mérida, and northwestern Ecuador), and Tonatia saurophila maresi (distributed in Venezuela east and south of the Cordillera de Mérida, the Guianas, Trinidad and Tobago, northeastern Brazil, and along the upper Amazon basin in Colombia, Ecuador, Peru, and Bolivia). The last two subspecies are an attractive example to test predictions about the historical role of the Andes in mammalian diversification. Based on morphological descriptions, morphometric analyses, and phylogenetic reconstruction using the mitochondrial gene Cyt- b and the nuclear exon RAG2, this study evaluates the intraspecific relationships within Tonatia saurophila and the taxonomic status of the taxon. The three subspecies of T. saurophila are recognizable as full species: Tonatia bakeri , Tonatia maresi , and Tonatia saurophila . The latter is restricted to its type locality and possibly is extinct. Tonatia bakeri , in addition to being larger than T. maresi , is morphologically distinguishable by possessing an acute apex at the posterior edge of the skull, a well-developed clinoid process, and relatively robust mandibular condyles, and by lacking a diastema between the canine and the first lower premolar. The genetic distance between T. bakeri and T. maresi is 7.65%.

SPECIATION IN MAMMALS AND THE GENETIC SPECIES CONCEPT.

Robert Baker, Robert Bradley (2006)
We define a genetic species as a group of genetically compatible interbreeding natural populations that is genetically isolated from other such groups. This focus on genetic isolation rather than reproductive isolation distinguishes the Genetic Species Concept from the Biological Species Concept. Recognition of species that are genetically isolated (but not reproductively isolated) results in an enhanced understanding of biodiversity and the nature of speciation as well as speciation-based issues and evolution of mammals. We review criteria and methods for recognizing species of mammals and explore a theoretical scenario, the Bateson-Dobzhansky-Muller (BDM) model, for understanding and predicting genetic diversity and speciation in mammals. If the BDM model is operating in mammals, then genetically defined phylogroups would be predicted to occur within species defined by morphology, and phylogroups experiencing stabilizing selection will evolve genetic isolation without concomitant morphological diversification. Such species will be undetectable using classical skin and skull morphology (Morphological Species Concept). Using cytochrome-b data from sister species of mammals recognized by classical morphological studies, we estimated the number of phylogroups that exist within mammalian species and hypothesize that there will be >2,000 currently unrecognized species of mammals. Such an underestimation significantly affects conclusions on the nature of speciation in mammals, barriers associated with evolution of genetic isolation, estimates of biodiversity, design of conservation initiatives, zoonoses, and so on. A paradigm shift relative to this and other speciation-based issues will be needed. Data that will be effective in detecting these "morphologically cryptic genetic species" are genetic, especially DNA-sequence data. Application of the Genetic Species Concept uses genetic data from mitochondrial and nuclear genomes to identify species and species boundaries, the extent to which the integrity of the gene pool is protected, nature of hybridization (if present), and introgression. Genetic data are unique in understanding species because the use of genetic data 1) can quantify genetic divergence from different aspects of the genome (mitochondrial and nuclear genes, protein coding genes, regulatory genes, mobile DNA, microsatellites, chromosomal rearrangements, heterochromatin, etc.); 2) can provide divergence values that increase with time, providing an estimate of time since divergence; 3) can provide a population genetics perspective; 4) is less subject to convergence and parallelism relative to other sets of characters; 5) can identify monophyly, sister taxa, and presence or absence of introgression; and 6) can accurately identify hybrid individuals (kinship and source of hybrid individuals, F(1)s, backcrosses, direction of hybridization, and in concert with other data identify which hybrids are sterile or fertile). The proposed definition of the Genetic Species Concept is more compatible with a description of biodiversity of mammals than is "reproductively isolated species." Genetic profiles of mammalian species will result in a genetic description of species and mammalian diversity, and such studies are being accelerated by technological advances that reduce cost and increase speed and efficiency of generating genetic data. We propose that this genetic revolution remain museum- and voucher specimen-based and that new names are based on a holotype (including associated tissues) deposited in an accredited museum.

Historical biogeography of the Isthmus of Panama.

Aaron O’Dea, G Leigh, C G Vermeij (2014)
About 3 million years ago (Ma), the Isthmus of Panama joined the Americas, forming a land bridge over which inhabitants of each America invaded the other-the Great American Biotic Interchange. These invasions transformed land ecosystems in South and Middle America. Humans invading from Asia over 12000 years ago killed most mammals over 44 kg, again transforming tropical American ecosystems. As a sea barrier, the isthmus induced divergent environmental change off its two coasts-creating contrasting ecosystems through differential extinction and diversification. Approximately 65 Ma invading marsupials and ungulates of North American ancestry, and xenarthrans of uncertain provenance replaced nearly all South America's non-volant mammals. There is no geological evidence for a land bridge at that time. Together with rodents and primates crossing from Africa 42 to 30 Ma, South America's mammals evolved in isolation until the interchange's first heralds less than 10 Ma. Its carnivores were ineffective marsupials. Meanwhile, North America was invaded by more competitive Eurasian mammals. The Americas had comparable expanses of tropical forest 55 Ma; later, climate change confined North American tropical forest to a far smaller area. When the isthmus formed, North American carnivores replaced their marsupial counterparts. Although invaders crossed in both directions, North American mammals spread widely, diversified greatly, and steadily replaced South American open-country counterparts, unused to effective predators. Invading South American mammals were less successful. South America's birds, bats, and smaller rainforest mammals, equally isolated, mostly survived invasion. Its vegetation, enriched by many overseas invaders, remained intact. This vegetation resists herbivory effectively. When climate permitted, South America's rainforest, with its bats, birds and mammals, spread to Mexico. Present-day tropical American vegetation is largely zoned by trade-offs between exploiting well-watered settings versus surviving droughts, exploiting fertile versus coping with poor soil, and exploiting lowland warmth versus coping with cooler altitudes. At the start of the Miocene, a common marine biota extended from Trinidad to Ecuador and western Mexico, which evolved in isolation from the Indo-Pacific until the Pleistocene. The seaway between the Americas began shoaling over 12 Ma. About 10 Ma the land bridge was briefly near-complete, allowing some interchange of land mammals between the continents. By 7 Ma, the rising sill had split deeper-water populations. Sea temperature, salinity and sedimentary carbon content had begun to increase in the Southern Caribbean, but not the Pacific. By 4 Ma, the seaway's narrowing began to extinguish Caribbean upwellings. By 2 Ma, upwellings remained only along Venezuela; Caribbean plankton, suspension-feeding molluscs and their predators had declined sharply, largely replaced by bottom-dwelling corals and calcareous algae and magnificent coral reefs. Closing the seaway extinguished the Eastern Pacific's reef corals (successors recolonized from the Indo-Pacific 6000 years ago), whereas many molluscs of productive waters that once thrived in the Caribbean now survive only in the Eastern Pacific. The present-day productive Eastern Pacific, with few, small coral reefs and a plankton-based ecosystem contrasts with the Caribbean, whose clear water favours expansive coral reefs and bottom-dwelling primary producers. These ecosystems reflect the trade-off between fast growth and effective defence with attendant longevity. Overfishing with new technologies during the last few centuries, however, has caused population crashes of ever-smaller marine animals, devastating Caribbean ecosystems. © 2013 The Authors. Biological Reviews © 2013 Cambridge Philosophical Society.

PAST: paleontologocal statistics software package for education and data analysis.