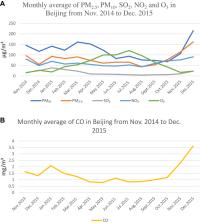 Short-term exposure to major air pollutants can increase the risk of acute exacerbation in chronic obstructive pulmonary disease (COPD) patients. However, evidence on the mechanism of acute exacerbation of COPD (AECOPD) caused by air pollutants is still limited. A total of 78 patients with stable COPD and 58 healthy controls were recruited in Peking University Third Hospital in China from December 2014 to January 2015. The correlation and lag effect over 7 days (lag1–7) of 6 air pollutants with clinical symptoms and inflammatory markers in induced sputum were analyzed. PM 2.5, NO 2 and CO were positively correlated with the COPD assessment test (CAT) score at lag 5, PM 10 was positively correlated with the CAT score at lag 3, MMP-9 and IL-8 were positively correlated with PM 2.5, PM 10 and NO 2 at lag 2, and CO was positively correlated with each other marker at lag 4. Short-term exposure to PM 2.5, PM 10, NO 2, and CO can cause a neutrophil-mediated airway inflammatory response, followed by increased clinical symptoms. If the PM 2.5, PM 10, NO 2 and CO exposure levels increase during air pollution monitoring, the early usage of medication or reduction of exposure to pollutants can effectively reduce the clinical symptoms of patients.

Outdoor air pollution and respiratory health in patients with COPD.

S A Bremner,  Louise Marston,  Paul H. Anderson … (2011)
Time series studies have shown adverse effects of outdoor air pollution on mortality and hospital admissions in patients with chronic obstructive pulmonary disease (COPD) but panel studies have been inconsistent. This study investigates short-term effects of outdoor nitrogen dioxide, ozone, sulfur dioxide, particulate matter (PM(10)) and black smoke on exacerbations, respiratory symptoms and lung function in 94 patients with COPD in east London. Patients were recruited from an outpatient clinic and were asked to complete daily diary cards (median follow-up 518 days) recording exacerbations, symptoms and lung function, and the amount of time spent outdoors. Outdoor air pollution exposure (lag 1 day) was obtained from local background monitoring stations. Symptoms but not lung function showed associations with raised pollution levels. Dyspnoea was significantly associated with PM(10) (increase in odds for an IQR change in pollutant: 13% (95% CI 4% to 23%)) and this association remained after adjustment for other the pollutants measured. An IQR increase in nitrogen dioxide was associated with a 6% (0-13%) increase in the odds of a symptomatic fall in peak flow rate. The corresponding effect sizes for PM(10) and black smoke were 12% (2-25%) and 7% (1-13%), respectively. It is concluded that outdoor air pollution is associated with important adverse effects on symptoms in patients with COPD living in London.

Major air pollutants and risk of COPD exacerbations: a systematic review and meta-analysis

Jinhui Li,  Shengzhi Sun,  Robert Tang … (2016)
Background Short-term exposure to major air pollutants (O3, CO, NO2, SO2, PM10, and PM2.5) has been associated with respiratory risk. However, evidence on the risk of chronic obstructive pulmonary disease (COPD) exacerbations is still limited. The present study aimed at evaluating the associations between short-term exposure to major air pollutants and the risk of COPD exacerbations. Methods After a systematic search up until March 30, 2016, in both English and Chinese electronic databases such as PubMed, EMBASE, and CNKI, the pooled relative risks and 95% confidence intervals were estimated by using the random-effects model. In addition, the population-attributable fractions (PAFs) were also calculated, and a subgroup analysis was conducted. Heterogeneity was assessed by I 2. Results In total, 59 studies were included. In the single-pollutant model, the risks of COPD were calculated by each 10 μg/m3 increase in pollutant concentrations, with the exception of CO (100 μg/m3). There was a significant association between short-term exposure and COPD exacerbation risk for all the gaseous and particulate pollutants. The associations were strongest at lag0 and lag3 for gaseous and particulate air pollutants, respectively. The subgroup analysis not only further confirmed the overall adverse effects but also reduced the heterogeneities obviously. When 100% exposure was assumed, PAFs ranged from 0.60% to 4.31%, depending on the pollutants. The adverse health effects of SO2 and NO2 exposure were more significant in low-/middle-income countries than in high-income countries: SO2, relative risk: 1.012 (95% confidence interval: 1.001, 1.023); and NO2, relative risk: 1.019 (95% confidence interval: 1.014, 1.024). Conclusion Short-term exposure to air pollutants increases the burden of risk of COPD acute exacerbations significantly. Controlling ambient air pollution would provide benefits to COPD patients.

Is the CAT questionnaire sensitive to changes in health status in patients with severe COPD exacerbations?

M. Roset,  F. Soler,  Àlvar Agustí … (2012)
The COPD Assessment Test (CAT) was validated in English showing good psychometric properties. The objective of this study is to assess the capacity of the CAT to detect changes in health status in patients experiencing COPD exacerbations (ECOPD) and to further explore the validity of the Spanish version. An observational study was conducted in 49 Spanish centres. Patients hospitalised because of ECOPD (n = 224) completed the CAT, the St. George's Respiratory Questionnaire-adapted for COPD (SGRQ-C) and the London Chest Activities of Daily Living (LCADL) questionnaire during the first 48 hours of admission and 4 ± 1 weeks after discharge. Stable patients (n = 153) also completed these at recruitment and 4 ± 1 weeks later. Over 90% of patients were male. The CAT discriminated between stable and ECOPD patients (15.8 vs 22.4, p < 0.01), as well as between patients with different levels of airflow limitation and dyspnea (MRC scale). The CAT proved sensitive to change; change in mean score was 8.9 points (effect size (ES), 0.90) in ECOPD patients reporting their health state as "much better" after discharge, 4.8 points in those reporting "quite a lot better" (ES = 0.63), and 4.6 points in those reporting "slightly better" (ES = 0.59). Cronbach's alpha and Intraclass Correlation Coefficient were 0.86 and 0.83, respectively. It correlated with both the SGRQ (r = 0.82; p < 0.01) and the LCADL (r = 0.63; p < 0.01). Change in CAT correlated well with Δ SGRQ (r = 0.63; p < 0.01). The CAT showed to be sensitive to the change in health status associated with ECOPD. We also provide evidence of the validity of the Spanish version.