Are visual impairments responsible for emotion decoding deficits in alcohol-dependence? 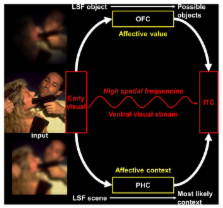 Emotional visual perception deficits constitute a major problem in alcohol-dependence. Indeed, the ability to assess the affective content of external cues is a key adaptive function, as it allows on the one hand the processing of potentially threatening or advantageous stimuli, and on the other hand the establishment of appropriate social interactions (by enabling rapid decoding of the affective state of others from their facial expressions). While such deficits have been classically considered as reflecting a genuine emotion decoding impairment in alcohol-dependence, converging evidence suggests that underlying visual deficits might play a role in emotional alterations. This hypothesis appears to be relevant especially as data from healthy populations indicate that a coarse but fast analysis of visual inputs would allow emotional processing to arise from early stages of perception. After reviewing those findings and the associated models, the present paper underlines data showing that rapid interactions between emotion and vision could be impaired in alcohol-dependence and provides new research avenues that may ultimately offer a better understanding of the roots of emotional deficits in this pathological state.

Patrik Vuilleumier (2005)
Emotional processes not only serve to record the value of sensory events, but also to elicit adaptive responses and modify perception. Recent research using functional brain imaging in human subjects has begun to reveal neural substrates by which sensory processing and attention can be modulated by the affective significance of stimuli. The amygdala plays a crucial role in providing both direct and indirect top-down signals on sensory pathways, which can influence the representation of emotional events, especially when related to threat. These modulatory effects implement specialized mechanisms of 'emotional attention' that might supplement but also compete with other sources of top-down control on perception. This work should help to elucidate the neural processes and temporal dynamics governing the integration of cognitive and affective influences in attention and behaviour.

Melvyn Goodale,  Danny A. Milner (1991)
Accumulating neuropsychological, electrophysiological and behavioural evidence suggests that the neural substrates of visual perception may be quite distinct from those underlying the visual control of actions. In other words, the set of object descriptions that permit identification and recognition may be computed independently of the set of descriptions that allow an observer to shape the hand appropriately to pick up an object. We propose that the ventral stream of projections from the striate cortex to the inferotemporal cortex plays the major role in the perceptual identification of objects, while the dorsal stream projecting from the striate cortex to the posterior parietal region mediates the required sensorimotor transformations for visually guided actions directed at such objects.

Emotion processing and the amygdala: from a 'low road' to 'many roads' of evaluating biological significance.

Ralph Adolphs,  Luiz Pessoa (2010)
A subcortical pathway through the superior colliculus and pulvinar to the amygdala is commonly assumed to mediate the non-conscious processing of affective visual stimuli. We review anatomical and physiological data that argue against the notion that such a pathway plays a prominent part in processing affective visual stimuli in humans. Instead, we propose that the primary role of the amygdala in visual processing, like that of the pulvinar, is to coordinate the function of cortical networks during evaluation of the biological significance of affective visual stimuli. Under this revised framework, the cortex has a more important role in emotion processing than is traditionally assumed.