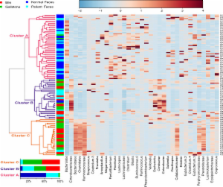 Elucidating gut microbiota among gallstone patients as well as the complex bacterial colonization of cholesterol gallstones may help in both the prediction and subsequent lowered risk of cholelithiasis. To this end, we studied the composition of bacterial communities of gut, bile, and gallstones from 29 gallstone patients as well as the gut of 38 normal individuals, examining and analyzing some 299, 217 bacterial 16S rRNA gene sequences from 120 samples.

First, as compared with normal individuals, in gallstone patients there were significant ( P < 0.001) increases of gut bacterial phylum Proteobacteria and decreases of three gut bacterial genera, Faecalibacterium, Lachnospira, and Roseburia. Second, about 70% of gut bacterial operational taxonomic units (OTUs) from gallstone patients were detectable in the biliary tract and bacteria diversity of biliary tract was significantly ( P < 0.001) higher than that of gut. Third, analysis of the biliary tract core microbiome (represented by 106 bacteria OTUs) among gallstone patients showed that 33.96% (36/106) of constituents can be matched to known bacterial species (15 of which have publicly available genomes). A genome-wide search of MDR, BSH, bG, and phL genes purpotedly associated with the formation of cholesterol gallstones showed that all 15 species with known genomes (e.g., Propionibacterium acnes, Bacteroides vulgates, and Pseudomonas putida) contained at least contained one of the four genes. This finding could potentially provide underlying information needed to explain the association between biliary tract microbiota and the formation of cholesterol gallstones.

Laura Piddock (2006)
It is well established that multidrug-resistance efflux pumps encoded by bacteria can confer clinically relevant resistance to antibiotics. It is now understood that these efflux pumps also have a physiological role(s). They can confer resistance to natural substances produced by the host, including bile, hormones and host-defence molecules. In addition, some efflux pumps of the resistance nodulation division (RND) family have been shown to have a role in the colonization and the persistence of bacteria in the host. Here, I present the accumulating evidence that multidrug-resistance efflux pumps have roles in bacterial pathogenicity and propose that these pumps therefore have greater clinical relevance than is usually attributed to them.

Beyond the Venn diagram: the hunt for a core microbiome.

Jo Handelsman,  Ashley Shade (2011)
Discovering a core microbiome is important for understanding the stable, consistent components across complex microbial assemblages. A core is typically defined as the suite of members shared among microbial consortia from similar habitats, and is represented by the overlapping areas of circles in Venn diagrams, in which each circle contains the membership of the sample or habitats being compared. Ecological insight into core microbiomes can be enriched by 'omics approaches that assess gene expression, thereby extending the concept of the core beyond taxonomically defined membership to community function and behaviour. Parameters defined by traditional ecology theory, such as composition, phylogeny, persistence and connectivity, will also create a more complex portrait of the core microbiome and advance understanding of the role of key microorganisms and functions within and across ecosystems. © 2011 Society for Applied Microbiology and Blackwell Publishing Ltd.

Effect of inulin on the human gut microbiota: stimulation of Bifidobacterium adolescentis and Faecalibacterium prausnitzii.

Carlett Ramirez-Farias,  Kathleen Slezak,  Zoë Fuller … (2009)
Prebiotics are food ingredients that improve health by modulating the colonic microbiota. The bifidogenic effect of the prebiotic inulin is well established; however, it remains unclear which species of Bifidobacterium are stimulated in vivo and whether bacterial groups other than lactic acid bacteria are affected by inulin consumption. Changes in the faecal microbiota composition were examined by real-time PCR in twelve human volunteers after ingestion of inulin (10 g/d) for a 16-d period in comparison with a control period without any supplement intake. The prevalence of most bacterial groups examined did not change after inulin intake, although the low G+C % Gram-positive species Faecalibacterium prausnitzii exhibited a significant increase (10.3% for control period v. 14.5% during inulin intake, P=0.019). The composition of the genus Bifidobacterium was studied in four of the volunteers by clone library analysis. Between three and five Bifidobacterium spp. were found in each volunteer. Bifidobacterium adolescentis and Bifidobacterium longum were present in all volunteers, and Bifidobacterium pseudocatenulatum, Bifidobacterium animalis, Bifidobacterium bifidum and Bifidobacterium dentium were also detected. Real-time PCR was employed to quantify the four most prevalent Bifidobacterium spp., B. adolescentis, B. longum, B. pseudocatenulatum and B. bifidum, in ten volunteers carrying detectable levels of bifidobacteria. B. adolescentis showed the strongest response to inulin consumption, increasing from 0.89 to 3.9% of the total microbiota (P=0.001). B. bifidum was increased from 0.22 to 0.63% (P<0.001) for the five volunteers for whom this species was present.