Probiotics in the prevention of eczema: a randomised controlled trial 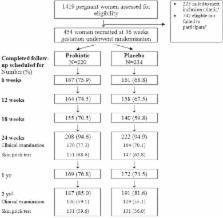 To evaluate a multistrain, high-dose probiotic in the prevention of eczema.

Pregnant women and their infants.

Diagnosed eczema at age 2 years. Infants were followed up by questionnaire. Clinical examination and skin prick tests to common allergens were done at 6 months and 2 years.

The study did not provide evidence that the probiotic either prevented eczema during the study or reduced its severity. However, the probiotic seemed to prevent atopic sensitisation to common food allergens and so reduce the incidence of atopic eczema in early childhood.

Worldwide variation in prevalence of symptoms of asthma, allergic rhinoconjunctivitis, and atopic eczema: ISAAC. The International Study of Asthma and Allergies in Childhood (ISAAC) Steering Committee.

S Headache Classification Committee of the International Headache,  R Beasley,  Neil Pearce … (1998)
Systematic international comparisons of the prevalences of asthma and other allergic disorders in children are needed for better understanding of their global epidemiology, to generate new hypotheses, and to assess existing hypotheses of possible causes. We investigated worldwide prevalence of asthma, allergic rhinoconjunctivitis, and atopic eczema. We studied 463,801 children aged 13-14 years in 155 collaborating centres in 56 countries. Children self-reported, through one-page questionnaires, symptoms of these three atopic disorders. In 99 centres in 42 countries, a video asthma questionnaire was also used for 304,796 children. We found differences of between 20-fold and 60-fold between centres in the prevalence of symptoms of asthma, allergic rhinoconjunctivitis, and atopic eczema, with four-fold to 12-fold variations between the 10th and 90th percentiles for the different disorders. For asthma symptoms, the highest 12-month prevalences were from centres in the UK, Australia, New Zealand, and Republic of Ireland, followed by most centres in North, Central, and South America; the lowest prevalences were from centres in several Eastern European countries, Indonesia, Greece, China, Taiwan, Uzbekistan, India, and Ethiopia. For allergic rhinoconjunctivitis, the centres with the highest prevalences were scattered across the world. The centres with the lowest prevalences were similar to those for asthma symptoms. For atopic eczema, the highest prevalences came from scattered centres, including some from Scandinavia and Africa that were not among centres with the highest asthma prevalences; the lowest prevalence rates of atopic eczema were similar in centres, as for asthma symptoms. The variation in the prevalences of asthma, allergic rhinoconjunctivitis, and atopic-eczema symptoms is striking between different centres throughout the world. These findings will form the basis of further studies to investigate factors that potentially lead to these international patterns.

Donald Y M Leung,  Thomas Bieber (2003)
Atopic dermatitis is a highly pruritic chronic inflammatory skin disorder affecting 10-20% of children worldwide. Symptoms can persist or begin in adulthood. It is also the most common cause of occupational skin disease in adults. This disease results from an interaction between susceptibility genes, the host's environment, pharmacological abnormalities, skin barrier defects, and immunological factors. New management approaches have evolved from advances in our understanding of the pathobiology of this common skin disorder.

Probiotics and prevention of atopic disease: 4-year follow-up of a randomised placebo-controlled trial.

Marko Kalliomäki,  Heikki Arvilommi,  Erika Isolauri … (2003)
Perinatal administration of the probiotic Lactobacillus rhamnosus strain GG (ATCC 53103), reduces incidence of atopic eczema in at-risk children during the first 2 years of life (infancy). We have therefore assessed persistence of the potential to prevent atopic eczema at 4 years. Atopic disease was diagnosed on the basis of a questionnaire and a clinical examination. 14 of 53 children receiving lactobacillus had developed atopic eczema, compared with 25 of 54 receiving placebo (relative risk 0.57, 95% CI 0.33-0.97). Skin prick test reactivity was the same in both groups: ten of 50 children previously given lactobacillus compared with nine of 50 given placebo tested positive. Our results suggest that the preventive effect of lactobacillus GG on atopic eczema extends beyond infancy.