Origin and evolution of pathogenic coronaviruses 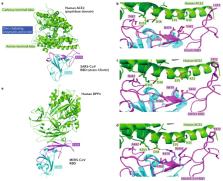 Coronaviruses have a broad host range and distribution, and some highly pathogenic lineages have spilled over to humans and animals. Here, Cui, Li and Shi explore the viral factors that enabled the emergence of diseases such as severe acute respiratory syndrome and Middle East respiratory syndrome.