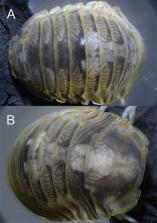 Gnorimosphaeroma oregonense (Dana, 1852) is revised, a male neotype is designated, photographed, and illustrated; the species occurs from Vancouver British Columbia to the central California coast. 16S-rDNA sequences (~650 bp) for all available ethanol preserved species of Gnorimosphaeroma were used to hypothesize their relationships. Our analyses revealed a sister taxon relationship between the fully marine G. oregonense and the brackish to freshwater species, G. noblei . The oyster associated and introduced G. rayi is sister to a previously not recognized or identified, but genetically distinct, Gnorimosphaeroma sp. collected at two sites in San Francisco Bay. Gnorimosphaeroma sp. is probably also a western Pacific species based on its genetic relationship to G. rayi . Photographic comparisons are offered for G. oregonense (marine), G. noblei (freshwater), G. rayi (introduced), G. sp. (presumably introduced), and G. insulare (San Nicolas Island). Records of the holdings at the Los Angeles County Museum of Natural History are summarized. Without material available north of Vancouver through Alaska, the range of G. oregonense could not be genetically verified. This review includes a diagnosis and description of the genus Gnorimosphaeroma Menzies, 1954.

K Katoh (2002)
A multiple sequence alignment program, MAFFT, has been developed. The CPU time is drastically reduced as compared with existing methods. MAFFT includes two novel techniques. (i) Homo logous regions are rapidly identified by the fast Fourier transform (FFT), in which an amino acid sequence is converted to a sequence composed of volume and polarity values of each amino acid residue. (ii) We propose a simplified scoring system that performs well for reducing CPU time and increasing the accuracy of alignments even for sequences having large insertions or extensions as well as distantly related sequences of similar length. Two different heuristics, the progressive method (FFT-NS-2) and the iterative refinement method (FFT-NS-i), are implemented in MAFFT. The performances of FFT-NS-2 and FFT-NS-i were compared with other methods by computer simulations and benchmark tests; the CPU time of FFT-NS-2 is drastically reduced as compared with CLUSTALW with comparable accuracy. FFT-NS-i is over 100 times faster than T-COFFEE, when the number of input sequences exceeds 60, without sacrificing the accuracy.

emmanuel boutet,  Claire O'Donovan,  Kazutaka Katoh … (2005)
The accuracy of multiple sequence alignment program MAFFT has been improved. The new version (5.3) of MAFFT offers new iterative refinement options, H-INS-i, F-INS-i and G-INS-i, in which pairwise alignment information are incorporated into objective function. These new options of MAFFT showed higher accuracy than currently available methods including TCoffee version 2 and CLUSTAL W in benchmark tests consisting of alignments of >50 sequences. Like the previously available options, the new options of MAFFT can handle hundreds of sequences on a standard desktop computer. We also examined the effect of the number of homologues included in an alignment. For a multiple alignment consisting of ∼8 sequences with low similarity, the accuracy was improved (2–10 percentage points) when the sequences were aligned together with dozens of their close homologues (E-value < 10−5–10−20) collected from a database. Such improvement was generally observed for most methods, but remarkably large for the new options of MAFFT proposed here. Thus, we made a Ruby script, mafftE.rb, which aligns the input sequences together with their close homologues collected from SwissProt using NCBI-BLAST.