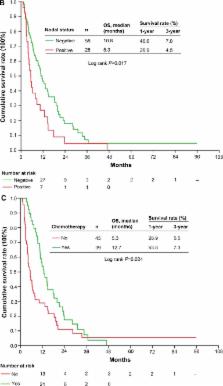 Several unfavorable prognostic factors have been proposed for peripheral cholangiocarcinoma (PCC) in patients undergoing hepatectomy, including gross type of tumor, vascular invasion, lymph node metastasis, a high carbohydrate antigen 19-9 level, and a positive resection margin. However, the clinical effect of a positive surgical margin on the survival of patients with PCC after hepatectomy still needs to be clarified due to conflicting results.

PCC patients with hepatolithiasis, periductal infiltrative or periductal infiltrative mixed with mass-forming growth, higher T stage, and more advanced stage tended to have higher positive resection margin rates after hepatectomy. PCC patients who underwent curative hepatectomy had a significantly higher survival rate than did those with a positive surgical margin. When PCC patients underwent hepatectomy with a positive resection margin, the histological grade of the tumor, nodal positivity, and chemotherapy significantly affected overall survival. Locoregional recurrence was the most common pattern of recurrence.

A positive resection margin had an unfavorable effect on overall survival in PCC patients undergoing hepatectomy. In these patients, the prognosis was determined by the biology of the tumor, including differentiation and nodal positivity, and chemotherapy increased overall survival.

R Schulick,  T. Gamblin,  Lynn M. Clary … (2011)
To identify factors associated with outcome after surgical management of intrahepatic cholangiocarcinoma (ICC) and examine the impact of lymph node (LN) assessment on survival. From an international multi-institutional database, 449 patients who underwent surgery for ICC between 1973 and 2010 were identified. Clinical and pathologic data were evaluated using uni- and multivariate analyses. Median tumor size was 6.5 cm. Most patients had a solitary tumor (73%) and no vascular invasion (69%). Median survival was 27 months, and 5-year survival was 31%. Factors associated with adverse prognosis included positive margin status (hazard ratio [HR], 2.20; P < .001), multiple lesions (HR, 1.80; P = .001), and vascular invasion (HR, 1.59; P = .015). Tumor size was not a prognostic factor (HR, 1.03; P = .23). Patients were stratified using the American Joint Committee on Cancer/International Union Against Cancer T1, T2a, and T2b categories (seventh edition) in a discrete step-wise fashion (P < .001). Lymphadenectomy was performed in 248 patients (55%); 74 of these (30%) had LN metastasis. LN metastasis was associated with worse outcome (median survival: N0, 30 months v N1, 24 months; P = .03). Although patients with no LN metastasis were able to be stratified by tumor number and vascular invasion (N0; P < .001), among patients with N1 disease, multiple tumors and vascular invasion, either alone or together, failed to discriminate patients into discrete prognostic groups (P = .34). Although tumor size provides no prognostic information, tumor number, vascular invasion, and LN metastasis were associated with survival. N1 status adversely affected overall survival and also influenced the relative effect of tumor number and vascular invasion on prognosis. Lymphadenectomy should be strongly considered for ICC, because up to 30% of patients will have LN metastasis.

Adjuvant therapy in the treatment of biliary tract cancer: a systematic review and meta-analysis.

Connie Horgan,  A Horgan,  Steven Knox … (2012)
The benefit of adjuvant therapy (AT) for biliary tract cancer (BTC) is unclear, with conflicting results from nonrandomized studies. We report a systematic review and meta-analysis to determine the impact of AT on survival. Studies published between 1960 and November 2010, which evaluated adjuvant chemotherapy (CT), radiotherapy (RT), or both (CRT) compared with curative-intent surgery alone for resected BTC were included. Only tumors of the gallbladder and bile ducts were assessed. Published data were extracted and computed into odds ratios (ORs) for death at 5 years. Subgroup analyses of benefit based on lymph node (LN) or resection margin positivity (R1) were prespecified. Data were weighted by generic inverse variance and pooled using random-effect modeling. Twenty studies involving 6,712 patients were analyzed. There was a nonsignificant improvement in overall survival with any AT compared with surgery alone (pooled OR, 0.74; P = .06). There was no difference between gallbladder and bile duct tumors (P = .68). The association was significant when the two registry analyses were excluded. Those receiving CT or CRT derived statistically greater benefit than RT alone (OR, 0.39, 0.61, and 0.98, respectively; P = .02). The greatest benefit for AT was in those with LN-positive disease (OR, 0.49; P = .004) and R1 disease (OR, 0.36; P = .002). This analysis supports AT for BTC. Prospective randomized trials are needed to provide better rationale for this commonly used strategy. On the basis of our data, such trials could involve two active comparators rather than a no-treatment arm among patients with LN-positive or R1 disease.

(1990)
The Liver Cancer Study Group of Japan analyzed statistically 12,887 cases of primary liver cancer diagnosed from January 1, 1982 to December 31, 1985 in more than 500 institutes throughout the country. The study was based on the answers to 258 questions. There were 4354 cases of hepatocellular carcinoma, 256 cases of cholangiocellular carcinoma, 49 cases of mixed carcinoma, 22 cases of hepatoblastoma, 10 cases of sarcoma, and 74 other cases. The survey and analysis, based mainly on 4765 histologically proved cases, included gross anatomic and histologic features of the tumors, pathology of the noncancerous portion, distant metastases, past medical history, frequency of positive Hepatitis B surface antigen and Hepatitis B surface antibody, age distribution, various diagnostic procedures, surgical procedures, and survival rate in relation to operative curability and tumor stage.