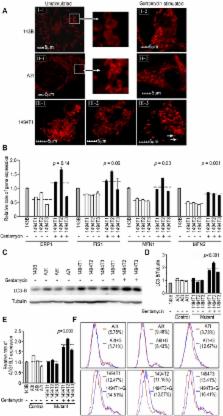 Aminoglycosides as modifying factors modulated the phenotypic manifestation of mitochondrial rRNA mutations and the incomplete penetrance of hearing loss. In this report, using cybrids harboring the m.1494C>T mutation, we showed that gentamycin aggravated mitochondrial dysfunction in a combination of the m.1494C>T mutation. The m.1494C>T mutation was responsible for the dramatic reduction in three mtDNA-encoded proteins of H-strand, with the average of 39% reduction, except of the MT-ND6 protein, accompanied with 21% reduction of ATP production and increase in mitochondrial reactive oxygen species, compared with those of control cybrids. After exposure to gentamycin, 35% reduction of mitochondrial ATP production was observed in mutant cybrids with a marked decrease of the mitochondrial membrane potential. More excessive cellular reactive oxygen species was detected with stimulus of gentamycin than those in mutant cells. Under gentamycin and m.1494C>T stress together, more dysfunctional mitochondria were forced to fuse and exhibited mitophagy via up-regulated LC3-B, as a compensatory protective response to try to optimize mitochondrial function, rather than undergo apoptosis. These findings may provide valuable information to further understand of mechanistic link between mitochondrial rRNA mutation, toxicity of AGs and hearing loss.

Mitochondrial fusion, fission and autophagy as a quality control axis: the bioenergetic view.

Gilad Twig, Brigham B. Hyde, Orian Shirihai … (2008)
The mitochondrial life cycle consists of frequent fusion and fission events. Ample experimental and clinical data demonstrate that inhibition of either fusion or fission results in deterioration of mitochondrial bioenergetics. While fusion may benefit mitochondrial function by allowing the spreading of metabolites, protein and DNA throughout the network, the functional benefit of fission is not as intuitive. Remarkably, studies that track individual mitochondria through fusion and fission found that the two events are paired and that fusion triggers fission. On average each mitochondrion would go though approximately 5 fusion:fission cycles every hour. Measurement of Deltapsi(m) during single fusion and fission events demonstrates that fission may yield uneven daughter mitochondria where the depolarized daughter is less likely to become involved in a subsequent fusion and is more likely to be targeted by autophagy. Based on these observations we propose a mechanism by which the integration of mitochondrial fusion, fission and autophagy forms a quality maintenance mechanism. According to this hypothesis pairs of fusion and fission allow for the reorganization and sequestration of damaged mitochondrial components into daughter mitochondria that are segregated from the networking pool and then becoming eliminated by autophagy.

T Prezant, J V Agapian, M Bohlman … (1993)
Maternally transmitted non-syndromic deafness was described recently both in pedigrees with susceptibility to aminoglycoside ototoxicity and in a large Arab-Israeli pedigree. Because of the known action of aminoglycosides on bacterial ribosomes, we analysed the sequence of the mitochondrial rRNA genes of three unrelated patients with familial aminoglycoside-induced deafness. We also sequenced the complete mitochondrial genome of the Arab-Israeli pedigree. All four families shared a nucleotide 1555 A to G substitution in the 12S rRNA gene, a site implicated in aminoglycoside activity. Our study offers the first description of a mitochondrial rRNA mutation leading to disease, the first cases of non-syndromic deafness caused by a mitochondrial DNA mutation and the first molecular genetic study of antibiotic-induced ototoxicity.

Giovanni Benard, Nadège Bellance, Dominic James … (2007)
Mitochondria form a dynamic network, and it remains unclear how the alternate configurations interact with bioenergetics properties. The metabolic signals that link mitochondrial structure to its functional states have not been fully characterized. In this report, we analyze the bidirectional relationships between mitochondrial morphology and function in living human cells. First, we determined the effect of mitochondrial fission on energy production by using small interfering RNA (siRNA) targeting DRP1, which revealed the importance of membrane fluidity on the control of bioenergetics. Second, we followed the effect of rotenone, a specific inhibitor of respiratory chain complex I, which causes large structural perturbations, once a threshold was reached. Last, we followed changes in the mitochondrial network configuration in human cells that had been treated with modulators of oxidative phosphorylation, and in fibroblasts from two patients with mitochondrial disease where the respiratory rate, DeltaPsi and the generation of reactive oxygen species (ROS) were measured. Our data demonstrate that the relationship between mitochondrial network organization and bioenergetics is bidirectional, and we provide a model for analyzing the metabolic signals involved in this crosstalk.

This work was supported by the 973 Program (2014CB541704) from the Ministry of Science and Technology of China (GMX) and Key project (81330024) from National Natural Science Foundation of China (GMX). The funders had no role in study design, data collection and analysis, decision to publish, or preparation of the manuscript.