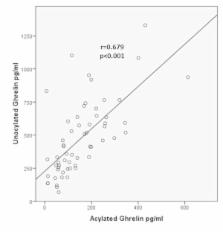 The current markers of disease activity in Takayasu arteritis (TA) are insufficient for proper assessment. We investigated circulating levels of unacylated and acylated ghrelin, leptin and adiponectin and their relationships with disease activity in patients with TA.

This study suggests that plasma unacylated and acylated ghrelin levels may be useful in monitoring disease activity and planning treatment strategies for patients with TA. The serum leptin level and leptin/ghrelin ratio may also be used to help assess the disease activity.

Anita R. Howard,  G. M. Lord,  Arnold Bloom … (1998)
Nutritional deprivation suppresses immune function. The cloning of the obese gene and identification of its protein product leptin has provided fundamental insight into the hypothalamic regulation of body weight. Circulating levels of this adipocyte-derived hormone are proportional to fat mass but maybe lowered rapidly by fasting or increased by inflammatory mediators. The impaired T-cell immunity of mice now known to be defective in leptin (ob/ob) or its receptor (db/db), has never been explained. Impaired cell-mediated immunity and reduced levels of leptin are both features of low body weight in humans. Indeed, malnutrition predisposes to death from infectious diseases. We report here that leptin has a specific effect on T-lymphocyte responses, differentially regulating the proliferation of naive and memory T cells. Leptin increased Th1 and suppressed Th2 cytokine production. Administration of leptin to mice reversed the immunosuppressive effects of acute starvation. Our findings suggest a new role for leptin in linking nutritional status to cognate cellular immune function, and provide a molecular mechanism to account for the immune dysfunction observed in starvation.

The American College of Rheumatology 1990 criteria for the classification of Takayasu arteritis.

Gene Hunder,  Thomas Lie,  A Fauci … (1990)
Criteria for the classification of Takayasu arteritis were developed by comparing 63 patients who had this disease with 744 control patients with other forms of vasculitis. Six criteria were selected for the traditional format classification: onset at age less than or equal to 40 years, claudication of an extremity, decreased brachial artery pulse, greater than 10 mm Hg difference in systolic blood pressure between arms, a bruit over the subclavian arteries or the aorta, and arteriographic evidence of narrowing or occlusion of the entire aorta, its primary branches, or large arteries in the proximal upper or lower extremities. The presence of 3 or more of these 6 criteria demonstrated a sensitivity of 90.5% and a specificity of 97.8%. A classification tree also was constructed with 5 of these 6 criteria, omitting claudication of an extremity. The classification tree demonstrated a sensitivity of 92.1% and a specificity of 97.0%.

J. Giordano,  M Rottem,  G. Kerr … (1994)
To evaluate prospectively the clinical features, angiographic findings, and response to treatment of patients with Takayasu arteritis. 60 patients with Takayasu arteritis were studied at the National Institute of Allergy and Infectious Diseases between 1970 and 1990 and were followed for 6 months to 20 years (median follow-up, 5.3 years). Data on clinical features, angiographic and laboratory findings, disease course, and response to therapy were all recorded and stored in a computer-based retrieval system. The Warren Magnuson Clinical Center of the National Institutes of Health. In our series of patients, Takayasu arteritis was more common in Asian persons compared with persons from other racial groups. Females (97%) were most frequently affected. The median age at disease onset was 25 years. Juveniles had a delay in diagnosis that was about four times that of adults. The clinical presentation ranged from asymptomatic to catastrophic with stroke. The most common clinical finding was a bruit. Hypertension was most often associated with renal artery stenosis. Only 33% of all patients had systemic symptoms on presentation. Sixty-eight percent of patients had extensive vascular disease; stenotic lesions were 3.6-fold more common than were aneurysms (98% compared with 27%). The erythrocyte sedimentation rate was not a consistently reliable surrogate marker of disease activity. Surgical bypass biopsy specimens from clinically inactive patients showed histologically active disease in 44% of patients. Although clinically significant palliation usually occurred after angioplasty or bypass of severely stenotic vessels, restenosis was common. Medical therapy was required for 80% of patients, whereas 20% had monophasic self-limiting disease. Immunosuppressive treatment with glucocorticoids alone or in combination with a cytotoxic agent failed to induce remission in one fourth of patients; about half of those who achieved remission later relapsed. In North America, Takayasu arteritis is a rare disease. It is heterogeneous in presentation, progression, and response to therapy. Current laboratory markers of disease activity are insufficiently reliable to guide management. Most patients require repeated and, at times, prolonged courses of therapy. Although mortality was low, substantial morbidity occurred in most patients.

This is an open access article distributed under the terms of the Creative Commons Attribution License ( http://creativecommons.org/licenses/by/2.0), which permits unrestricted use, distribution, and reproduction in any medium, provided the original work is properly cited