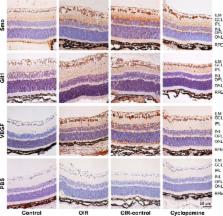 The aim of the study was to investigate the signal transduction mechanism of Hedgehog–vascular endothelial growth factor in oxygen-induced retinopathy (OIR) and the effects of cyclopamine on OIR.

An OIR model was established in C57BL/6J mice exposed to hyperoxia. Two hundred mice were randomly divided into a control group, an OIR group, an OIR-control group (treated with isometric phosphate-buffered saline by intravitreal injection), and a cyclopamine group (treated with cyclopamine by intravitreal injection), with 50 mice in each group. The retinal vascular morphology was observed using adenosine diphosphatase and number counting using hematoxylin and eosin-stained image. Quantitative real-time quantitative polymerase chain reaction was used to detect mRNA expression. Protein location and expression were evaluated using immunohistochemistry and Western blot.

Oxygen-induced retinopathy in the mouse.

Rachael Sullivan,  Francesca D’Amato,  E Wesolowski … (1993)
To develop oxygen-induced retinopathy in the mouse with reproducible and quantifiable proliferative retinal neovascularization suitable for examining pathogenesis and therapeutic intervention for retinal neovascularization in retinopathy of prematurity (ROP) and other vasculopathologies. One-week-old C57BL/6J mice were exposed to 75% oxygen for 5 days and then to room air. A novel fluorescein-dextran perfusion method has been developed to assess the vascular pattern. The proliferative neovascular response was quantified by counting the nuclei of new vessels extending from the retina into the vitreous in 6 microns sagittal cross-sections. Cross-sections were also stained for glial fibrillary acidic protein (GFAP). Fluorescein-dextran angiography delineated the entire vascular pattern, including neovascular tufts in flat-mounted retinas. Hyperoxia-induced neovascularization occurred at the junction between the vascularized and avascular retina in the mid-periphery. Retinal neovascularization occurred in all the pups between postnatal day 17 and postnatal day 21. There was a mean of 89 neovascular nuclei per cross-section of 9 eyes in hyperoxia compared to less than 1 nucleus per cross-section of 8 eyes in the normoxia control (P < 0.0001). Proliferative vessels were not associated with GFAP-positive astrocyte processes. The authors have described a reproducible and quantifiable mouse model of oxygen-induced retinal neovascularization that should prove useful for the study of pathogenesis of retinal neovascularization as well as for the study of medical intervention for ROP and other retinal angiopathies.

Tadas K. Rimkus,  Richard Carpenter,  Shadi Qasem … (2016)
The sonic hedgehog (Shh) signaling pathway is a major regulator of cell differentiation, cell proliferation, and tissue polarity. Aberrant activation of the Shh pathway has been shown in a variety of human cancers, including, basal cell carcinoma, malignant gliomas, medulloblastoma, leukemias, and cancers of the breast, lung, pancreas, and prostate. Tumorigenesis, tumor progression and therapeutic response have all been shown to be impacted by the Shh signaling pathway. Downstream effectors of the Shh pathway include smoothened (SMO) and glioma-associated oncogene homolog (GLI) family of zinc finger transcription factors. Both are regarded as important targets for cancer therapeutics. While most efforts have been devoted towards pharmacologically targeting SMO, developing GLI-targeted approach has its merit because of the fact that GLI proteins can be activated by both Shh ligand-dependent and -independent mechanisms. To date, two SMO inhibitors (LDE225/Sonidegib and GDC-0449/Vismodegib) have received FDA approval for treating basal cell carcinoma while many clinical trials are being conducted to evaluate the efficacy of this exciting class of targeted therapy in a variety of cancers. In this review, we provide an overview of the biology of the Shh pathway and then detail the current landscape of the Shh-SMO-GLI pathway inhibitors including those in preclinical studies and clinical trials.

Hans E. Grossniklaus,  Shin Kang,  Lennart Berglin (2010)
There have been numerous types of animal models of choroidal neovascularization (CNV) and retinal neovascularization (RNV). Understanding the pathobiology of CNV and RNV is important when evaluating and utilizing these models. Both CNV and RNV are dynamic processes. A break or defect in Bruchs' membrane is necessary for CNV to develop. This may be induced with a laser, mechanically via surgery, or in the setting of transgenic mice. Some of the transgenic mouse models spontaneously develop RNV and/or retinal angiomatous proliferation (RAP)-like lesions. The pathogenesis of RNV is well-known and is generally related to ischemic retinopathy. Models of oxygen-induced retinopathy (OIR) closely resemble retinopathy of prematurity (ROP). The streptozotocin (STZ) rat model develops features similar to diabetic retinopathy. This review summarizes general categories and specific examples of animal models of CNV and RNV. There are no perfect models of CNV or RNV and individual investigators are encouraged to choose the model that best suits their needs. Copyright © 2010 Elsevier Ltd. All rights reserved.