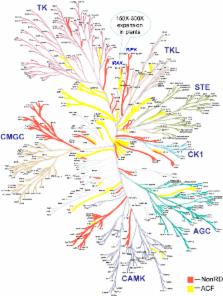 Plants and animals mediate early steps of the innate immune response through pathogen recognition receptors (PRRs). PRRs commonly associate with or contain members of a monophyletic group of kinases called the interleukin-1 receptor-associated kinase (IRAK) family that include Drosophila Pelle, human IRAKs, rice XA21 and Arabidopsis FLS2. In mammals, PRRs can also associate with members of the receptor-interacting protein (RIP) kinase family, distant relatives to the IRAK family. Some IRAK and RIP family kinases fall into a small functional class of kinases termed non-RD, many of which do not autophosphorylate the activation loop. We surveyed the yeast, fly, worm, human, Arabidopsis, and rice kinomes (3,723 kinases) and found that despite the small number of non-RD kinases in these genomes (9%–29%), 12 of 15 kinases known or predicted to function in PRR signaling fall into the non-RD class. These data indicate that kinases associated with PRRs can largely be predicted by the lack of a single conserved residue and reveal new potential plant PRR subfamilies.

Animal and plant innate immune systems use a set of similar receptors to recognize disease-causing microbes. These receptors function in pathogen surveillance and are located either at the cell surface or inside the cell. They provide a first line of defense against pathogen attack and rapidly activate defense signaling pathways following infection. Key to their ability to respond to pathogens, a closely related family of proteins called kinases either associate with these receptors or are present as part of the receptors themselves. These kinases face two challenges. The signals must be carefully modulated, as misregulation can result in disease and overall poor health. Second, these signaling systems must be resilient to attempts by pathogens to interfere with and block defense responses. The researchers have found that the kinases that are linked to pathogen receptors and initiate innate immune responses contain an alteration within a critical functional domain of the kinase that is not commonly found in similar kinases that control nondefense pathways. While the exact impact these changes have on kinase function is unclear, these findings provide insight into how these kinases may have evolved to compensate for the unique challenges they face. Moreover, they provide a predictive tool for identifying new candidate kinases that control innate immune responses.

The protein kinase complement of the human genome.

G. Manning (2002)
We have catalogued the protein kinase complement of the human genome (the "kinome") using public and proprietary genomic, complementary DNA, and expressed sequence tag (EST) sequences. This provides a starting point for comprehensive analysis of protein phosphorylation in normal and disease states, as well as a detailed view of the current state of human genome analysis through a focus on one large gene family. We identify 518 putative protein kinase genes, of which 71 have not previously been reported or described as kinases, and we extend or correct the protein sequences of 56 more kinases. New genes include members of well-studied families as well as previously unidentified families, some of which are conserved in model organisms. Classification and comparison with model organism kinomes identified orthologous groups and highlighted expansions specific to human and other lineages. We also identified 106 protein kinase pseudogenes. Chromosomal mapping revealed several small clusters of kinase genes and revealed that 244 kinases map to disease loci or cancer amplicons.

Kazuyoshi Takeda,  S Akira,  T Kaisho (2001)
Recognition of pathogens is mediated by a set of germline-encoded receptors that are referred to as pattern-recognition receptors (PRRs). These receptors recognize conserved molecular patterns (pathogen-associated molecular patterns), which are shared by large groups of microorganisms. Toll-like receptors (TLRs) function as the PRRs in mammals and play an essential role in the recognition of microbial components. The TLRs may also recognize endogenous ligands induced during the inflammatory response. Similar cytoplasmic domains allow TLRs to use the same signaling molecules used by the interleukin 1 receptors (IL-1Rs): these include MyD88, IL-1R--associated protein kinase and tumor necrosis factor receptor--activated factor 6. However, evidence is accumulating that the signaling pathways associated with each TLR are not identical and may, therefore, result in different biological responses.

Comparative analysis of the receptor-like kinase family in Arabidopsis and rice.

Yun-Huei Tzeng,  Shin-Han Shiu,  R. Pan … (2004)
Receptor-like kinases (RLKs) belong to the large RLK/Pelle gene family, and it is known that the Arabidopsis thaliana genome contains >600 such members, which play important roles in plant growth, development, and defense responses. Surprisingly, we found that rice (Oryza sativa) has nearly twice as many RLK/Pelle members as Arabidopsis does, and it is not simply a consequence of a larger predicted gene number in rice. From the inferred phylogeny of all Arabidopsis and rice RLK/Pelle members, we estimated that the common ancestor of Arabidopsis and rice had >440 RLK/Pelles and that large-scale expansions of certain RLK/Pelle members and fusions of novel domains have occurred in both the Arabidopsis and rice lineages since their divergence. In addition, the extracellular domains have higher nonsynonymous substitution rates than the intracellular domains, consistent with the role of extracellular domains in sensing diverse signals. The lineage-specific expansions in Arabidopsis can be attributed to both tandem and large-scale duplications, whereas tandem duplication seems to be the major mechanism for recent expansions in rice. Interestingly, although the RLKs that are involved in development seem to have rarely been duplicated after the Arabidopsis-rice split, those that are involved in defense/disease resistance apparently have undergone many duplication events. These findings led us to hypothesize that most of the recent expansions of the RLK/Pelle family have involved defense/resistance-related genes.

Publisher ID: 05-PLPA-RA-0097R2 Serial Item and Contribution ID: plpa-02-01-02
DOI: 10.1371/journal.ppat.0020002
PMC ID: 1331981
PubMed ID: 16424920
Copyright statement: This is an open-access article distributed under the terms of the Creative Commons Public Domain declaration which stipulates that, once placed in the public domain, this work may be freely reproduced, distributed, transmitted, modified, built upon, or otherwise used by anyone for any lawful purpose.