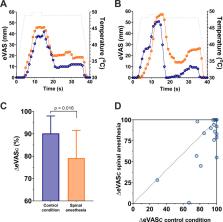 We confirmed that spinal anesthesia-induced deafferentation causes hyperalgesic responses to noxious thermal stimulation and reduced offset analgesia at dermatomes remote and above the level of deafferentation. While these data suggest that the reduction of offset analgesia has a central origin, related to alterations in brain areas involved in inhibitory pain control, we cannot exclude alternative (peripheral) mechanisms.

Hubert Niesters,  P Proto,  Dirk Aarts … (2014)
Tapentadol is an analgesic agent for treatment of acute and chronic pain that activates the µ-opioid receptor combined with inhibition of neuronal norepinephrine reuptake. Both mechanisms are implicated in activation of descending inhibitory pain pathways. In this study, we investigated the influence of tapentadol on conditioned pain modulation (CPM, an experimental measure of endogenous pain inhibition that gates incoming pain signals as a consequence of a preceding tonic painful stimulus) and offset analgesia (OA, a test in which a disproportionally large amount of analgesia becomes apparent upon a slight decrease in noxious heat stimulation).

Hadas Nahman-Averbuch,  Katherine Martucci,  Yelena Granovsky … (2014)
The role of endogenous analgesic mechanisms has largely been viewed in the context of gain modulation during nociceptive processing. However, these analgesic mechanisms may play critical roles in the extraction and subsequent utilization of information related to spatial and temporal features of nociceptive input. To date, it remains unknown if spatial and temporal filtering of nociceptive information is supported by similar analgesic mechanisms. To address this question, human volunteers were recruited to assess brain activation with functional magnetic resonance imaging during conditioned pain modulation (CPM) and offset analgesia (OA). CPM provides one paradigm for assessing spatial filtering of nociceptive information while OA provides a paradigm for assessing temporal filtering of nociceptive information. CPM and OA both produced statistically significant reductions in pain intensity. However, the magnitude of pain reduction elicited by CPM was not correlated with that elicited by OA across different individuals. Different patterns of brain activation were consistent with the psychophysical findings. CPM elicited widespread reductions in regions engaged in nociceptive processing such as the thalamus, insula, and secondary somatosensory cortex. OA produced reduced activity in the primary somatosensory cortex but was associated with greater activation in the anterior insula, dorsolateral prefrontal cortex, intraparietal sulcus, and inferior parietal lobule relative to CPM. In the brain stem, CPM consistently produced reductions in activity, while OA produced increases in activity. Conjunction analysis confirmed that CPM-related activity did not overlap with that of OA. Thus, dissociable mechanisms support inhibitory processes engaged during spatial vs temporal filtering of nociceptive information.

Peter J. Rogers,  Marc Yelle,  Robert C. Coghill (2007)
Temporal filtering of afferent information is an intrinsic component of the processing of numerous types of sensory information. To date, no temporal filtering mechanism has been identified for nociceptive information. The phenomenon of offset analgesia, the disproportionately large decrease in perceived pain following slight decreases in noxious thermal intensity, however, suggests the existence of such a mechanism. To test the hypothesis that a temporal filtering mechanism is engaged during noxious stimulus offset, subjects rated heat pain intensity while stimulus fall rates were varied from -0.5 to -5.0 degrees C/s. In the absence of a temporal filtering mechanism, pain intensity would be expected to decrease in direct proportion to the stimulus fall rate. However, psychophysical fall rates were considerably faster than stimulus fall rates, such that subjects reported no pain while stimulus temperatures were clearly within the noxious range (47.2 degrees C). In addition, paired noxious stimuli were presented simultaneously to determine if offset analgesia evoked by one stimulus could inhibit pain arising from a separate population of primary afferent neurons. Pain ratings were significantly lower than those reported from two constant 49 degrees C stimuli when offset analgesia was induced proximal to, but not distal to, a second noxious stimulus. These asymmetric spatial interactions are not readily explained by peripheral mechanisms. Taken together, these findings indicate that offset analgesia is mediated in part by central mechanisms and reflect a temporal filtering of the sensory information that enhances the contrast of dynamic decreases in noxious stimulus intensity.