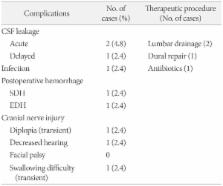 Microvascular decompression (MVD) for hemifacial spasm (HFS) involving the vertebral artery (VA) can be technically challenging. We investigated the therapeutic effects of a bioglue-coated Teflon sling technique on the VA during MVD in 42 cases.

A bioglue-coated Teflon sling was crafted by the surgeon and applied to patients in whom neurovascular compression was caused by the VA. The radiologic data, intra-operative findings with detailed introduction of the procedure, and the clinical outcomes of each patient were reviewed and analyzed.

The 42 patients included in the analysis consisted of 22 females and 20 males, with an average follow-up duration of 76 months (range 24–132 months). Intraoperative investigation revealed that an artery other than the VA was responsible for the neurovascular compression in all cases : posterior inferior cerebellar artery (PICA) in 23 patients (54.7%) and anterior inferior cerebellar artery (AICA) in 11 patients (26.2%). All patients became symptom-free after MVD. Neither recurrence nor postoperative neurological deficit was noted during the 2-year follow-up, except in one patient who developed permanent deafness. Cerebrospinal fluid (CSF) leak occurred in three patients, and one required dural repair.

Transposition of the VA using a bioglue-coated Teflon sling is a safe and effective surgical technique for HFS involving the VA. A future prospective study to compare clinical outcomes between groups with and without use of this novel technique is required.

P Jannetta, David Albin, M Abbasy … (1977)
The clinical and operative findings are reviewed in 47 patients with intractable hemifacial spasm. The syndrome was classical in its features in 45 patients and atypical in two. Mechanical compression distortion of the root exit zone of the facial nerve was noted in all 47 patients. In 46 the abnormality was vascular cross-compression, usually by an arterial loop. In one patient, a small cholesteatoma was discovered and removed. Morbidity and postoperative results are discussed.

Michael Resnick, Brian Subach, C Comey … (1998)
Microvascular decompression has become an accepted surgical technique for the treatment of trigeminal neuralgia, hemifacial spasm, glossopharyngeal neuralgia, and other cranial nerve rhizopathies. The senior author (P.J.J.) began performing this procedure in 1969 and has performed more than 4400 operations. The purpose of this article is to review some of the nuances of the technical aspects of this procedure. A review of 4415 operations shows that numerous modifications to the technique of microvascular decompression have occurred during the last 29 years. Of the 2420 operations performed for trigeminal neuralgia, hemifacial spasm, and glossopharyngeal neuralgia before 1990, cerebellar injury occurred in 21 cases (0.87%), hearing loss in 48 (1.98%), and cerebrospinal fluid (CSF) leakage in 59 cases (2.44%). Of the 1995 operations performed since 1990, cerebellar injuries declined to nine cases (0.45%), hearing loss to 16 (0.8%), and CSF leakage to 37 (1.85% p < 0.01, test for equality of distributions). The authors describe slight variations made to maximize surgical exposure and minimize potential complications in each of the six principal steps of this operation. These modifications have led to decreasing complication rates in recent years. Using the techniques described in this report, microvascular decompression is an extremely safe and effective treatment for many cranial nerve rhizopathies.