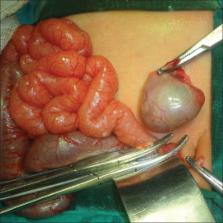 Testis follows a predictable course during its stepwise descent from its site of origin in the lumbar region to its final destination in ipsilateral hemi-scrotum. Undesended (cryptorchid) testis is more prone for neoplastic transformation. Testicular teratoma is rare relative to ovarian teratoma and occurs rarely prenatally than postnatally. Teratoma is composed of derivatives of three germ layers. Ultrasound with color Doppler is the most commonly used modality for assessment of prenatal status. Prenatal diagnosis of cryptorchid testicular teratoma involves identification of well-defined, complex solid-cystic lesion with calcifications along the path of testicular descent and absent testis in ipsilateral hemi-scrotum at 36 weeks of gestation. Complications associated with cryptorchid testicular teratoma include torsion, hemorrhage, or malignant transformation. Early diagnosis is important to avoid complications, and hence, ultrasound imaging features play an important role in diagnosis.

Hadley Wood,  Jack S. Elder (2009)
We dissected prevailing assumptions about cryptorchidism and reviewed data that support and reject these assumptions. Five questions about cryptorchidism and the risk of testicular cancer were identified because of their implications in parent counseling and clinical management. Standard search techniques through MEDLINE were used to identify all relevant English language studies of the questions being examined. Each of the 5 questions was then examined in light of the existing data. The RR of testicular cancer in a cryptorchidism case is 2.75 to 8. A RR of between 2 and 3 has been noted in patients who undergo orchiopexy by ages 10 to 12 years. Patients who undergo orchiopexy after age 12 years or no orchiopexy are 2 to 6 times as likely to have testicular cancer as those who undergo prepubertal orchiopexy. A contralateral, normally descended testis in a patient with cryptorchidism carries no increased risk of testis cancer. Persistently cryptorchid (inguinal and abdominal) testes are at higher risk for seminoma (74%), while corrected cryptorchid or scrotal testicles that undergo malignant transformation are most likely to become nonseminomatous (63%, p <0.0001), presumably because of a decreased risk of seminoma. Orchiectomy may be considered in healthy patients with cryptorchidism who are between ages 12 and 50 years. Observation should be recommended in postpubertal males at significant anesthetic risk and all males older than 50 years. While 5% to 15% of scrotal testicular remnants contain germinal tissue, only 1 case of carcinoma in situ has been reported, suggesting that the risk of malignancy in these remnants is extremely low.

Hans Pohl,  Aseem Shukla,  Peter D Metcalf … (2004)
Tumor registries, urological textbooks and literature surveys all assert that yolk sac tumors are the most common primary testicular tumors in boys 12 years and younger. In contrast, several individual institutions have reported that benign tumors are more common than malignant tumors. To clarify these discordant findings, we surveyed the primary pathology records from 4 major pediatric centers. The pathology records of the contributing centers were culled for primary testicular masses in boys 12 years and younger. Older boys and those with either paratesticular tumors or leukemia were excluded. The prevalence of each histological subtype was calculated from the pooled cases. A total of 98 patients met our criteria. Only 15% had yolk sac tumors. Teratomas comprised 48% of the tumors (mature 44%, immature 4%). Epidermoid cysts were found in another 14% of patients. Gonadal stromal cell tumors represented 13% of the total, divided among granulosa cell (5%), Leydig cell (4%), Sertoli cell (3%) and mixed gonadal stromal cell (1%). Other pathology, including cystic dysplasia (2), lymphoma (4), inflammatory pseudotumor (1) and gonadoblastoma (2), made up 9% of the total number of cases. We found that benign lesions represent the majority of primary testis tumors (74%), with the most common histological type being teratoma (48%). The reported high prevalence rates of prepubertal yolk sac tumors probably results from a reporting bias, since benign tumors are less likely to be submitted to tumor registries. Therefore, the primary operative approach to the majority of testis tumors in boys 12 years and younger should entail testis sparing surgery. Orchiectomy should be reserved for histologically confirmed malignancy based on increased preoperative alpha-fetoprotein and/or frozen section analysis of the tumor.

Clinical behavior and a contemporary management algorithm for prepubertal testis tumors: a summary of the Prepubertal Testis Tumor Registry.

Jonathan H. Ross,  Lisa Rybicki,  Robert Kay (2002)
The Prepubertal Testis Tumor Registry was established by the Urologic Section of the American Academy of Pediatrics in 1980 to record data on a large number of prepubertal testis tumors regarding presentation, treatment and outcome to define appropriate management better. We reviewed the registry data in the context of other modern studies to elucidate the appropriate management of these rare tumors. Relevant data in the prepubertal testis tumor registry were tabulated and analyzed. There were 395 prepubertal patients who had a primary testis tumor. Generally benign tumors accounted for 38% of cases. A significant proportion of tumors were benign regardless of patient age. alpha-Fetoprotein levels for patients with benign and malignant tumors overlapped in children younger than 6 months. Of the patients with yolk sac tumor 80% presented with stage 1 disease and overall survival was excellent. There were no metastases or deaths among the patients with teratoma. Of all patients with stromal tumors metastases developed in only 1. We recommend initial excisional biopsy for all amenable prepubertal testis tumors, except those with an alpha-fetoprotein level that is clearly increased for patient age. Patients with benign tumors may be released from oncological followup. Patients with stage I yolk sac tumor should be monitored closely, and those with recurrent or metastatic yolk sac tumor should be treated with chemotherapy. Retroperitoneal lymph node dissection is reserved for patients with recurrent retroperitoneal masses following chemotherapy. Aggressive treatment of metastatic Sertoli cell or undifferentiated stromal tumors is warranted.