The role of shared visual information for joint action coordination 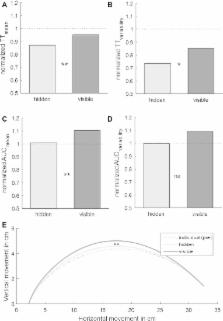 Author(s): Cordula Vesper a , * , Laura Schmitz a , Lou Safra b , Natalie Sebanz a , Günther Knoblich a

Previous research has identified a number of coordination processes that enable people to perform joint actions. But what determines which coordination processes joint action partners rely on in a given situation? The present study tested whether varying the shared visual information available to co-actors can trigger a shift in coordination processes. Pairs of participants performed a movement task that required them to synchronously arrive at a target from separate starting locations. When participants in a pair received only auditory feedback about the time their partner reached the target they held their movement duration constant to facilitate coordination. When they received additional visual information about each other’s movements they switched to a fundamentally different coordination process, exaggerating the curvature of their movements to communicate their arrival time. These findings indicate that the availability of shared perceptual information is a major factor in determining how individuals coordinate their actions to obtain joint outcomes.

Rocking together: dynamics of intentional and unintentional interpersonal coordination.

An interference effect of observed biological movement on action.

Philip J Kilner,  S-J. Blakemore,  Y Paulignan (2003)
It has been proposed that actions are intrinsically linked to perception and that imagining, observing, preparing, or in any way representing an action excites the motor programs used to execute that same action. There is neurophysiological evidence that certain brain regions involved in executing actions are activated by the mere observation of action (the so-called "mirror system;" ). However, it is unknown whether this mirror system causes interference between observed and simultaneously executed movements. In this study we test the hypothesis that, because of the overlap between action observation and execution, observed actions should interfere with incongruous executed actions. Subjects made arm movements while observing either a robot or another human making the same or qualitatively different arm movements. Variance in the executed movement was measured as an index of interference to the movement. The results demonstrate that observing another human making incongruent movements has a significant interference effect on executed movements. However, we found no evidence that this interference effect occurred when subjects observed a robotic arm making incongruent movements. These results suggest that the simultaneous activation of the overlapping neural networks that process movement observation and execution infers a measurable cost to motor control.

A minimal architecture for joint action.

Cordula Vesper,  Stephen Butterfill,  Günther Knoblich … (2010)
What kinds of processes and representations make joint action possible? In this paper, we suggest a minimal architecture for joint action that focuses on representations, action monitoring and action prediction processes, as well as ways of simplifying coordination. The architecture spells out minimal requirements for an individual agent to engage in a joint action. We discuss existing evidence in support of the architecture as well as open questions that remain to be empirically addressed. In addition, we suggest possible interfaces between the minimal architecture and other approaches to joint action. The minimal architecture has implications for theorising about the emergence of joint action, for human-machine interaction, and for understanding how coordination can be facilitated by exploiting relations between multiple agents' actions and between actions and the environment. Copyright © 2010. Published by Elsevier Ltd.